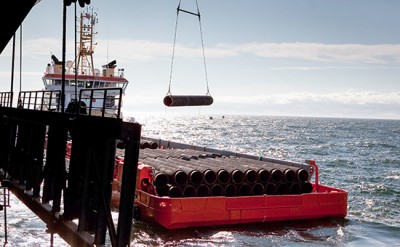 The pipelaying crane of Italian Saipem company will begin works on the shallow section of the Black Sea to build the Turkish Stream project in the first half of June, TACC reported quoting Oleg Aksyutin, member of Board of Gasprom company.

“The limitations and suspension of the executive works have been lifted. As you know, we have concluded a contract with Saipem company to build the first branch. The works will be carried out by two vessels depending on the conditions of laying. The works in the shallow section of the Black Sea will begin in the first half of June,” Aksyutin said at a press conference in Gasprom.

He added that the pipes, which have been bought within the framework of the South Stream gas pipeline, will be used in the Turkish Stream construction. “Majority of the pipes has been already manufactured and they are stored at the storage sites,” Aksyutin added.

In December 2014 Russia announced that it is going to give up construction of South Stream pipeline, which had to pass through the Black Sea bottom and then along the territory of Bulgaria, Serbia and Hungary in favor the new gas pipeline towards Turkey (Turkish Stream). That time South Stream Transport (operator of construction of the offshore section of the South Stream) announced delay of performance of the contract to deliver pipes for the Turkish Stream pipeline.

The gas hub will be created on the border of Turkey and Greece and the EU member-states must independently use their gas transportation capacities for further reception of this gas on their own territory.