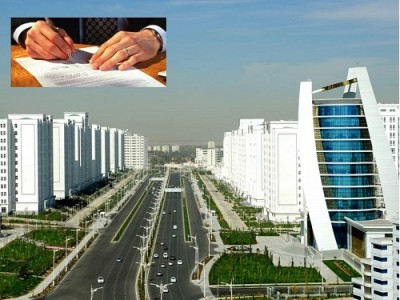 After the Energy Ministers of Azerbaijan, Turkey, Turkmenistan and the EU Vice President for Energy signed the joint Declaration in Ashgabad on May 1, 2015 many media interpreted that as “Turkmenistan’s joining the trans-Caspian gas pipeline project and its readiness to pump its gas to Europe via the Azerbaijani infrastructure.”

However, after carefully studied the document signed in Ashgabad and analyzed reaction of the Turkmenistan’s officials, Turan agency believes that it is too early to draw any conclusions. The situation has been developing fast and there are always different options.

At first, in the Declaration the participants emphasized that in order to ensure principles of equality and mutual benefit in the joint operations, it would be advisable to fix the commercial frameworks, which according to the international legal acts and the European Union legislation will be aimed at maintaining long-term natural gas deliveries from Turkmenistan to Europe.

This means that the above-mentioned details prove that a certain work has been done before this meeting and EU had offered the Turkmenistan side some “road map.”

Secondly, judging by all, this plan has coincided with the interests of the Turkmenistan government, as a result of which the European Commission Vice President Marosh Shefchovich made his sensational statement for Reuters: Europe will receive Turkmenistan gas in 2019.

Thirdly, the European Commission is not sure yet if the Turkmenistan gas will be exported via Azerbaijan and the trans-Caspian gas pipeline. They evaluate Russia’s risks on the Caspian Sea sensibly and realize that there might be opposition, if the EU refuses to receive Russian gas via the Turkish Stream.  Most likely for this reason Shefchovich also mentioned delivery of the Turkmen gas via Iran.

Fourthly,  after the meeting on May 1 Turkmenistan President received Energy Ministers of Azerbaijan and Turkey Natig Aliyev and Taner Yildiz. He spoke warmly to each one and discussed bilateral energy projects in details. However, he has met with the EU high-ranking officials before the meeting,

This means that the EU representative has played the role of the “first fiddle” both before, during and after the meeting. Turkmenistan does not want to deal with pipeline safety issues all alone and it is trying to ask the international organizations for help.