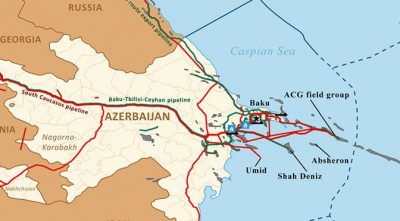 Following the recent (March 4) visit to Ankara by his counterpart from Turkmenistan, Gurbanguly Berdimuhamedov, Turkish President Recep Tayyip Erdogan announced a trilateral mechanism on energy issues between Turkey, Turkmenistan and Azerbaijan. He specifically noted that the three countries share a vision of transferring Turkmenistani natural gas to Europe via Turkey. This announcement reopened discussions on the practical possibilities for the realization of the Trans-Caspian Pipeline (TCP). When the three countries’ foreign ministers met in Ashgabat in January 2015, the Azerbaijani and Turkish sides reportedly invited Turkmenistan to join the Trans-Anatolian gas pipeline (TANAP) project.

The European Union has voiced support for the Trans- Caspian Pipeline since 2011 in particular, hoping that its realization will reduce Europe’s dependency on Russian gas. Russian and Iranian opposition to the Trans- Caspian Pipeline remains strong, and Turkmenistan has not yet declared whether it believes trilateral energy cooperation offers the way forward for realizing the TCP.

However, recent regional and international developments have influenced Ashgabat’s calculations, and emphasized the need for close cooperation with Turkey and Azerbaijan. Within the trilateral format, both Azerbaijan and Turkey see broader opportunities for cooperation with Turkmenistan, and this format has worked effectively over the course of the last year.

From Turkmenistan’s point of view, Gazprom’s declaration that it would cut its imports by nearly two-thirds—to 4 billion cubic meters (bcm)—has serious implications. The Russian financial crisis and decline in oil prices has had a direct impact on Turkmenistan’s internal market; notably, it has devalued its currency by 19 percent versus the dollar. These various factors have strengthened Ashgabat’s motivations for seeking alternative markets for its gas.

But Turkmenistan’s traditional approach to pipeline politics—that of “zero financial burden, hun- dred percent effectiveness”—remains unchanged, and so Ashgabat is interested in exporting to markets through existing pipelines or where there are opportunities for expansion, like with the China route. Despite Ashgabat’s dissatisfaction with Gazprom’s decision to cut gas imports, after twenty years of neutrality, Turkmenistan’s approach is unlikely to change; it will almost certainly maintain political sensitivity in its approach toward Moscow. This is particularly important given the broader atmosphere of confrontation between Russia and the West. Ashgabat is highly unlikely to actively support the European Union’s energy diversification strategy, as this would contradict the strongly business-based approach of the Turkmenistani leadership toward gas politics.

On the other hand, in the last year, Turkmenistan has become much more aware of the opportunities on the Turkish market, both in and of itself, and as a conduit to the European market, in terms of diversifying gas exports. Erdogan’s visit to Ashgabat last November saw the signing of a framework agreement for bilateral energy cooperation, details of which have not been made public, and since then, the prospects of exporting Turkmen gas to European market have increased. Notably, by joining TANAP, Turkmenistan does not necessarily commit to exporting its gas via Iranian or Azerbaijani territory. In both directions there are problems both in terms of infrastructure and market. The Azerbaijani route requires the construction of the TCP, and there is no existing infrastructure inside Iran that would allow the transfer of Turkmenistani gas to Turkey’s borders.

Moreover, Azerbaijan is primarily interested in selling its gas to European markets. Prior to the decision between the Trans-Adriatic Pipeline (TAP) and Nabucco-West for the transfer of Azerbaijan’s Shah Deniz Phase 2 gas to Europe, gas from Turkmenistan was intended to increase the scope of the project and attract investment from European energy firms. Today, however—without underestimating its value— Turkmenistani gas no longer plays a significant functional role in relation to TANAP and TAP. And in the Iranian direction, there is no existing pipeline to export huge volumes of Turkmenistan’s gas to Turkey. With the partial normalization of relations with EU countries, Tehran is looking to export its gas to the European market, and in that respect, Turkmenistan could be a competitor. Thus, while Turkey’s aim is to become an energy hub, politically speaking Ankara is not declaring any preference for or putting political support behind exports of Turkmenistani gas through Turkish territory.

Nonetheless, the trilateral consultation among Azerbaijan’s, Turkmenistan’s and Turkey’s foreign ministers—which in the next stage will involve the presidents—is a major diplomatic achievement by Ankara. Turkey first began political consultations to bring all sides closer together less than a year ago.

The EU has been trying to forge energy cooperation for the TCP between Azerbaijan and Turkmenistan since 2011, without result. In fact, Turkey’s idea for trilateral energy consultations dates back to 2008, when Turkey invited both Azerbaijan and Turkmenistan to cooperate on a drilling project in the Black Sea. Today, there are greater opportunities for cooperation between the three sides’ energy firms than in 2008. Nevertheless, two major barriers remain to translating the idea of energy consultation into practical action on the Trans-Caspian Pipeline.

First, both Azerbaijan and Turkmenistan are anticipating the results of the next summit between the Caspian heads of state in Astana in 2016, when the legal status of the Caspian Sea will be on the agenda. The fate of the TCP has long been closely linked to this issue. At the 39th meeting of the Working Group on the determination of the legal status of the Caspian Sea, issues related to environmental problems and use of water were agreed between Caspian littoral states, according to the Azerbaijani side. Consensus on environmental issues—raised by Russia and Iran—is key, but in the absence of a signed agreement on the status of the Caspian, the issue remains unresolved. Therefore, neither Azerbaijan nor Turkmenistan is ready for intensive discussions on the TCP in advance of the 2016 Astana summit.

Second, the crucial question of who will undertake the financial burden of the TCP remains unclear to observers. Essentially, Turkmenistan is not interested in shouldering this burden, and since Azerbaijan has already funded major parts of the TANAP and TAP projects, Baku is not especially keen to either. Baku and Ashgabat, though they have never said this officially, are probably expecting the EU to cover the construction cost, given that the construction will serve the EU’s interests. Aspects of the feasibility study for the TCP pipeline were presented at the Turkmen Gas Summit in 2014 (Trans Caspian Pipeline Environmental Overview, accessed March 11), but the precise details of the budget have not been published—though it is likely to be in excess of $3 billion. More importantly, the EU has not made any commitment, without which it will be hard to convince either Baku or Ashgabat.

At first glance, this trilateral energy cooperation does not seem to be directly linked to the TCP, and progress remains suspended until the Astana Summit. However, in the long term, this new format could facilitate an energy dialogue between Baku and Ashgabat. Involvement in joint projects, no matter how small, could be a positive step during this initial stage.

The main challenges in regard to the TCP will be the ongoing Azerbaijani-Turkmen disputes over Caspian oil fields, where there is a long history of conflict. Notably, Turkmenistan lays claim to the Kapyaz oil field, which appears to straddle the median line between Turkmenistan and Azerbaijan. The key question here is whether the construction of a pipeline westward from Turkmenistan across the Caspian to Baku will be sufficient reason for these two parties to reach agreement on ownership of the fields in question.

Last but not least, Iran’s international standing is set to change following the preliminary nuclear agreement with Western countries. In the long term, Tehran can plan for the development of national energy infrastructure and gas exports to Western markets, but this will take at minimum 4-5 years, given that Iran still lacks both technological capacity and the relevant energy infrastructure. Prior to that, the Astana meeting between the heads of the Caspian littoral states in 2016 will mark a crucial moment in terms of revealing whether Iran has changed its position towards the West.

Previously, Tehran’s chief argument against the TCP has been the alleged environmental cost. Therefore, it might be useful to include Iran in trilateral energy meetings; this would be diplomatically effective as well as a good opportunity for the regional countries involved in the talks.

About the author:
*Zaur Shiriyev, senior research fellow at the Caspian Center for Energy and Environment (CCEE) of ADA University, is the author of the policy brief. This is the updated version of article before published at EDM.