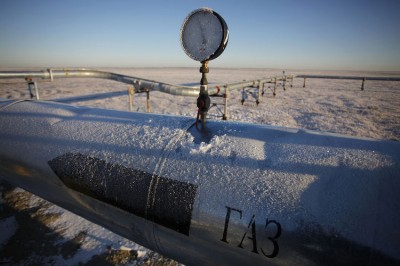 For four decades, through the depths of the Cold War and the collapse of the Soviet Union, Europe has relied on Russian gas to keep its economy moving, sending hundreds of billions of dollars to Moscow in return.

Today, that relationship is fraying. The European Union served OAO Gazprom, Russia’s exporter of the fuel, with an antitrust complaint, just as President Vladimir Putin is wielding gas as a tool in the conflict over Ukraine and inserting pipeline politics into Greece’s financial crisis.

None of this would stop the gas from flowing, analysts say, though Gazprom is preparing for a fight.

“Gas relations between Russia and Europe will continue, but Gazprom has to deal with a more stringent enforcement of EU competition rules and diversification plans,” said Marco Giuli, an analyst at the European Policy Center.

Russia, which earned 10 percent of its $498 billion of exports from gas supplies to Europe last year, soured its long-standing energy relations with the EU by annexing the Crimean peninsula from Ukraine. Putin then canceled Russia’s planned $45 billion South Stream gas link that was designed to bypass Ukraine, blaming EU opposition.

Adding to the tension, the European Commission unveiled antitrust charges against the Russian company on Wednesday, after a probe into Gazprom’s pricing practices. The end result may be a fine of as much as $3.8 billion, according to VTB Capital in Moscow.

“If a foreign-owned company looks into our practices they will find that we have the same practices no matter the flag of the company, or the ownership of the company, because we act in the interest of the consumers,” EU Competition Commissioner Margrethe Vestager said in an interview Wednesday. “What we find here is that consumers in five countries have paid unfairly high prices for their gas.”

The EU complaint, seen by Russia as a political weapon, accuses Gazprom of pursuing an unfair pricing policy in Bulgaria, Estonia, Latvia, Lithuania and Poland. Gazprom also included a number of territorial restrictors in eight central and east European countries, preventing gas from flowing freely, the commission said in its preliminary opinion.

In Bulgaria and Poland, the Russian company leveraged market dominance by making supplies conditional upon obtaining commitments on infrastructure, according to the EU.

Gazprom said it adheres to laws and seeks an “acceptable solution” to the probe with the help of the Russian government. The charges are groundless and the statement of objections doesn’t mean the company is guilty, the state-run exporter said in a statement.

“Gazprom’s best course of action” is to reach a deal with the EU, Alex Fak and Valery Nesterov, analysts at Moscow-based Sberbank Investment Research, said in an e-mailed note Tuesday. “What we fear most at this point is a knee-jerk reaction from the Russian government, one that would escalate the situation and cost Gazprom far more in the end.”

Since December, Gazprom has spent at least $1 billion to buy out its former partners in South Stream, scrapped plans to close an asset swap with Germany’s Wintershall AG and shelved an expansion of the Nord Stream pipeline under the Baltic Sea.

“Vestager’s move shows that the European Commission is no longer scared to intimidate Moscow,” said Bloomberg Intelligence analyst Elchin Mammadov. “Although the commission insists that the probe is not politically motivated, Kremlin will certainly not see it that way.”

Gazprom is criticizing an EU plan to cut its reliance on gas from Russia, which has almost 30 percent of the market. The EU strategy, endorsed by leaders this year, aims to accelerate cross-border gas and power interconnections, equalize pricing and diversify supply while reducing greenhouse-gas emissions.

Putin may have pulled the plug on South Stream, but he hasn’t given up on building another link bypassing Ukraine. His latest proposal is to build a second pipeline under the Black Sea to Turkey and Greece, which could then run further into the EU, reaching Italy and central Europe.

The EU’s case against Gazprom may complicate resolution of the Ukrainian crisis, increasing risk of gas-supply interruptions from Russia to Europe, Trevor Sikorski, head of gas, coal, carbon at Energy Aspects, said Wednesday.

Russia has warned Europe that it plans to stop shipping gas through Ukraine, its main route to Europe now, from 2020. With Gazprom planning to start deliveries to China by then, it “can sustain a pause” if the EU tries to block the planned Turkish Stream link, Chief Executive Officer Alexey Miller said last week.

Russian officials say the pipeline won’t violate EU rules because members will be able to build and own a network from Turkey’s border with Greece. Gazprom is giving up on controlling downstream assets in Europe to focus on competitive pricing, according to Giuli of the European Policy Center.

“The Gazprom strategy is adapting to the EU regulatory panorama,” Giuli said. “Turkish Stream signifies the new strategy — they will just bring the gas to the border and it will be up to the buyer to deal with European rules.”

Even so, there’s no guarantee the EU will view Turkish Stream any more favorably than South Stream once it has a chance to fully analyze the proposal, the bloc’s energy chief, Maros Sefcovic, told Russian newspaper Kommersant.

“To some extent, this is the same story as with South Stream,” Sefcovic said.

The Russians are playing the long game.

Energy Minister Alexander Novak said last week the EU can object all it wants, but it has no choice but to rely heavily on Russian gas for at least another quarter century.