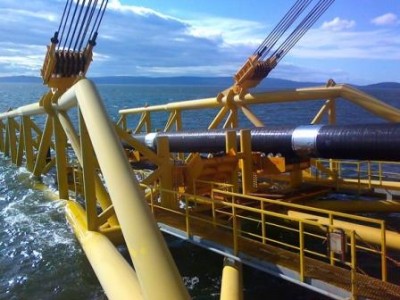 The European Union is extremely interested in expanding the energy cooperation with Turkmenistan, Malena Mard, the head of the EU delegation to Azerbaijan, told reporters Apr. 9.

She said Turkmenistan has large gas reserves, which it can supply to the markets in Europe, and the talks are underway between the EU, Azerbaijan and Turkmenistan on the issue.

She added that the matter rests in realizing a project for construction of the Trans-Caspian Gas Pipeline, which will allow bringing Turkmen gas to the infrastructure to be created as part of the Southern Gas Corridor project.

The Southern Gas Corridor will allow Europe to diversify its hydrocarbon supply sources and strengthen energy security and also will allow Azerbaijan to enter a new market in Europe.

The contract for development of the Shah Deniz offshore field was signed on June 4, 1996. The field’s proven reserve is estimated at 1.2 trillion cubic meters of gas and 240 million metric tons of condensate.

As part of the second stage of the field’s development, gas will be exported to Turkey and European markets by expanding the South Caucasus gas pipeline and the construction of Trans-Anatolian (TANAP) and Trans-Adriatic (TAP) gas pipelines.

Touching upon the Turkish Stream project, the EU representative said the organization is interested in all the projects that allow to diversify the routes of gas supply to Europe.

Turkish Stream envisages transportation of gas from Russia to Turkey through the Black Sea. The pipeline’s pumping capacity will by 63 billion cubic meters and it is planned to deliver around 50 billion cubic meters of this volume to the new gas hub on Turkish-Greek border.

Ranking fourth in the world for the volume of natural gas reserve, Turkmenistan seeks to significantly expand the access to the international gas market in order to use its natural resources as efficiently as possible.

The Ministry of Oil and Gas Industry and Mineral Resources of Turkmenistan said in early March that intensive work is continuing to organize the supply of 10-30 billion cubic meters of gas to the European market per year.

The ministry said the RSK Environment Ltd. carried out the preliminary environmental studies upon the World Bank’s order.

The examination confirmed that from the environmental point of view, the Trans-Caspian Gas Pipeline is a safe route, and today, Turkmenistan and Azerbaijan have every opportunity to implement the project for its construction as part of bilateral activities.

The fields in the Turkmen sector of the Caspian Sea may be the resource base for the gas supply via the Trans-Caspian Gas Pipeline at the initial stage, said the ministry.

In this case, the reference was made to the European experts, who believe that the presence of the already explored and proven natural gas reserve in the Turkmen sector of the Caspian Sea makes it possible to supply 16 billion cubic meters of gas per year in this direction.

In the future, there will be an opportunity to use the resources of gas fields in eastern Turkmenistan to supply gas through the Trans-Caspian Gas Pipeline. This will be possible after the commissioning of the East-West gas pipeline with a pumping capacity of 30 billion cubic meters per year. Its construction will be completed in 2015.