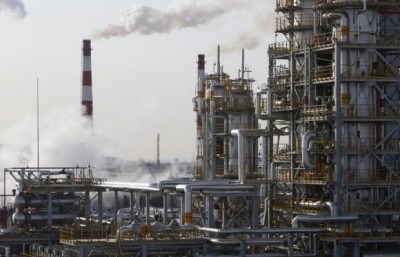 Russia may postpone completion of a huge pipeline to bring gas from two new fields to China, three sources with direct knowledge of the plans of export firm Gazprom said, delaying one of President Vladimir Putin’s signature projects.

The sources, speaking on condition of anonymity, said the “Power of Siberia” project may be put off until Moscow completes a separate, less ambitious project to send gas from existing fields to China through a pipeline thousands of kilometres further west.

Russia has denied that it has any plans to postpone the $55 billion “Power of Siberia” pipeline, despite a fall in global energy prices that has hurt the case for the investment required to develop the new fields it would serve.

Energy Minister Alexander Novak told Reuters last week that Gazprom was sticking to its plan to bring first gas under “Power of Siberia” by 2019. Gazprom is already clearing the route, and five Russian pipe producers have won contracts to supply around a third of all large-diameter pipes needed for the project.

The three industry and banking sources said Moscow could postpone completion of the route until after it builds the cheaper “Altai” route from existing fields to China’s west.

Such a change would effectively downgrade and delay a project that had been a centrepiece of Moscow’s plans to find new markets for its energy resources in Asia.

Moscow is determined to find new markets for its gas as Europe cuts back its reliance on Russian energy. The signing of the long awaited “Power of Siberia” deal in May was a diplomatic coup for the Kremlin.

It which would deliver 38 billion cubic metres of gas a year from new gas fields to China’s eastern industrial heartland. Some gas could also be shipped from Russia’s Pacific Ocean port at Vladivostok.

But the global fall in energy prices hurts the case for the investment required to develop the new gas fields in remote eastern Siberia north of Mongolia that would be hooked up to the pipe. The prices for gas in the deal, though not made public, are believed to be linked to the global price of oil, which has halved since it was signed last May.

Meanwhile, Moscow needs new outlets for gas from fields it has already developed further west, including the giant Bovanenkovo Yamal field opened in 2012, which now pumps around 40 billion cubic metres a year but can produce up to 140 bcm.

“Yamal gas needs new markets – that’s why Gazprom is pushing for the Altai route. That’s why neither Vladivostok nor the Power of Siberia are a priority – the last one even has no source to be connected to,” a banker close to Gazprom said.

A Gazprom source agreed with the assessment, saying that Altai “is a priority”.

CHEAPER FOR MOSCOW, WORSE FOR BEIJING

The western alternative Altai route would provide China with gas from Yamal, which is now pumped south from the Arctic to Russia’s domestic system and westwards to Europe. But the route is considerably less attractive to China, which already has gas in its far west, and needs it in the industrial east.

Russia and China signed a framework agreement in November for the Altai gas pipeline to sell 30 billion cubic metres of gas to China per year for 30 years. Russia hopes to sign a final deal in the first half of 2015.

The Altai pipeline is much cheaper to build for Russia than the “Power of Siberia” project, and would soak up existing spare capacity rather than require the development of new fields.

But Altai gas would reach China at its remote far western border, requiring a huge new pipeline system within China to take it to cities mainly in the centre and east.

“Linking the Altai pipeline with major gas consumers of China is a huge project. It would require a serious change of the Chinese five-year plan. It is a major obstacle for Gazprom,” said gas analyst Mikhail Korchemkin.

He predicted that Chinese customers would demand steep discounts, with a price “likely to be much lower than the average price of European exports of Gazprom”.

For now, Beijing says it is still interested in both projects, which would help it reduce its reliance on coal, but its preference for the eastern route is clear.

“Russia’s idea of the western route first is not new. It’s been put on the table for discussions for some time,” said Zeng Xingqiu, industry veteran and advisor to China National Petroleum Corp, with which Gazprom is in talks.

“The Chinese side has also made it clear that we want both lines. But the reality is we are short of gas on the eastern side, but have surplus supplies on the west.”

A source in a consultancy firm which works with Gazprom said the Russian gas firm should decide by summer which pipeline to build first.

“If there is a solid contract … then the western route could be built faster than the one from Yakutia (in the east),” the source said. A Gazprom source confirmed the timeframe for the decision.