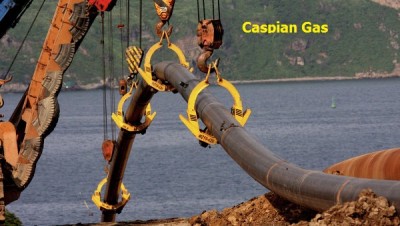 Europe may have found a way to dramatically reduce its reliance on Russian gas by getting the fuel from Azerbaijan through a pipeline in Turkey.

On March 17, Turkey broke ground for the $10 billion Trans Anatolian Natural Gas Project (TANAP), which is eventually expected to supply Europe with 31 billion cubic meters of gas per year.

TANAP is seen as so important that the groundbreaking, in the eastern Turkish province of Kars, was attended by Turkish President Recep Tayyip Erdogan, Georgian President Giorgi Margvelasvili and Azerrbaijani President Ilham Aliyev.

“We plan to establish Turkey as the energy distribution hub of the region,” Erdogan said at the groundbreaking ceremony.

The first gas shipments will be destined only for Turkey until 2020, when the Trans Adriatic Pipeline (TAP) will be completed to deliver gas to Europe. Once the TANAP and TAP pipelines are complete, Turkey will receive about 6 percent of the fuel and the rest will be delivered to Europe.

As for ownership of TANAP, Turkey has a 30 percent stake, Azerbaijan’s state-owned oil company SOCAR owns 58 percent and BP, which developed the Caspian’s Shah Deniz II oil field, will hold the remaining 12 percent.

Although the goal of TANAP is to reduce both Europe’s and Turkey’s dependence on Russian gas, Ankara’s ties with Moscow have been improving lately, and the two countries are negotiating a pipeline called the Turkish Stream that would move Russian gas under the Black Sea both to customers in Russia and in Europe.

Turkish Stream was intended to replace a previous Russian project to build a pipeline called South Stream to supply gas to European customers without transiting Ukraine, whose bad relations with Russia in the past decade have threatened Europe’s gas supply. That initiative was canceled in 2014 because of what Russian President Vladimir Putin called a lack of European cooperation.

Russia has also publicly questioned the value of the TANAP project, which it sees as competing with its Turkish Stream pipeline. Vladimir Chizhov, Moscow’s envoy to the European Union, called it “exorbitantly expensive” and “extremely challenging from a technical point of view.”

However, Taner Yildiz, Turkey’s minister of energy and natural resources, said TANAP was not conceived as a rival to the Russian-backed Turkish Stream pipeline.

Russia has also completed another gas pipeline to Europe called the Nord Stream, which supplies gas to Germany beneath the Baltic Sea. All these pipelines, whether completed or still in the planning stages, raise one key question: If they’re all meant to bypass Ukraine, how, then, will Ukraine get its own gas, and how will it replace the revenue it now receives from Europe as a conduit for Russian gas?