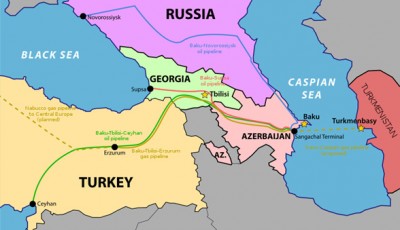 The European Union is interested in prompt holding of the tripartite meeting on the trans-Caspian pipeline construction, a source from the European Commission (EC) said.

EC jointly with Azerbaijan and Turkmenistan considers the possibility of holding a tripartite meeting in the coming months, said the same source to Trend agency.

The trans-Caspian pipeline is considered the optimal option of delivery of Turkmenistan energy resources to the European market. It is planned to lay the pipeline along the Caspian Sea bottom towards the Azerbaijani coast. From Azerbaijan Turkmenistan hydrocarbons could be transported to Turkey, which borders on the European countries.

The trans-Cspian pipeline could be implemented within the framework of a big Southern Gas Corridor project, which envisgaes gas deliveries from the Caspian region, in particular Azerbaijani gas to Europe.

The talks on the trans-Caspian gas pipeline between EU, Azerbaijan and Turkmenistan started in September 201.

Turkmenistan officials believe that consent of the sides (Azerbaijan and Turkmenistan), the territory of which the project covers, is enough for construction of the pipeline along the bottom of the Caspian Sea, legal status of which has not been determined yet.