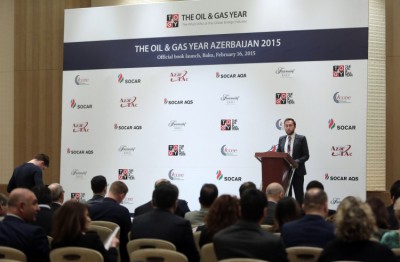 The second edition of the most comprehensive publication on Azerbaijan’s energy industry, The Oil & Gas Year Azerbaijan 2015, was launched at the Fairmont Hotel on February 16, 2015.

The report, published by The Oil & Gas Year, was produced in partnership with the State Oil Company of the Azerbaijan Republic (SOCAR) and the Caspian Centre for Energy and Environment. This year’s edition celebrated the 20th Anniversary of the Contract of the Century.

Mr. Elshad Nasirov, SOCAR’s vice president for investments and marketing delivered the keynote address at the launch event, which was followed by the year’s awards ceremony. Commenting on the progress made in Azerbaijan’s energy industry over the past year, he addressed the major projects further connecting Azerbaijan to the global energy community.

Expressing his support to The Oil & Gas Year Azerbaijan 2015, he added, “The Oil & Gas Year team have acted with the highest standards and produced the best resource for our oil and gas industry…this book is not for [those in attendance] but for the international community to be aware of what we are trying to achieve.”

At the ceremony, Ikhtiyar Akhundov, general director of BOS Shelf was honoured with the Man of the Year. Leading the largest fabrication yard in Azerbaijan, general manager of the BOS Shelf Yard – the historical Baku Deep Water Jacket Factory – Ikhtiyar Akhundov has effectively managed to keep the yard involved in all the major projects in Azerbaijan, such as the Chirag Oil Project and Shah Deniz phase one.

In order to fulfil its responsibilities for the Shah Deniz phase two project – where BOS Shelf has the responsibility of all the fabrication of offshore structures and marine support base services – and future offshore subsea developments, BOS Shelf will undergo a major strategic upgrade that will make the yard one of the most developed in the Caspian region. A training facility will be developed for the training of welders, fitters and riggers, developing 250 new welding procedures for the first time in Azerbaijan.

Furthermore, in order to cater for Shah Deniz and future subsea projects, BOS Shelf will build a special subsea facility, coating facility, new warehouse and new quays. Perhaps the most exciting visionary project of the yard is its push for becoming a logistic centre for servicing offshore projects, through the development of a $300 million-400 million, 1.7-kilometre quay with the necessary facilities for servicing vessels including those for bunkering, fuelling, water storage and mud storage.

Saipem-BOS Shelf-Star Gulf consortium was presented with the Contract of the Year award. In April 2014, the Saipem-BOS Shelf-Star Gulf signed a master agreement with BP for the fabrication, transportation and installation of the offshore facilities for the Shah Deniz phase two gas development project. Inside this master agreement, the consortium also signed two call-off agreements, a $750 million-contract for the construction of more than 45,000 tons of jackets, piles and subsea structures and a $1.8-billion contract for offshore transportation and installation of the jackets, piles, topsides and subsea infrastructure, laying export and in-field pipelines and diving services.

BP was presented with the Upstream Project of the Year award for the Shah Deniz phase two development. On December 17, 2013 the Shah Deniz Consortium led by BP announced the final investment decision for the stage 2 development of the Shah Deniz gas-condensate field. Shah Deniz will be the first fully subsea development in the Caspian Sea, demanding the drilling and completion of 26 subsea wells and the construction of two bridge-linked platforms. The upstream development together with the expansion of the South Caucasus Pipeline to transport the 16 bcm (565 bcf) per year of gas from phase two will cost around $28 billion, creating around 15,000 jobs in Azerbaijan alone.

The launch and awards ceremony was sponsored by SOCAR-AQS and Fairmont Hotel Baku.

The Oil & Gas Year Azerbaijan 2015 provides an in-depth analysis of the primary hydrocarbons projects of Azerbaijan, throughout the supply chain. In The Oil & Gas Year Azerbaijan 2015, Minister Natiq Aliyev says: “Azerbaijan fully supports the implementation of energy projects in the region for the creation of new effective transport corridors. The Southern Gas Corridor is crucial for the economic prosperity, energy security and political independence of southeastern Europe.”