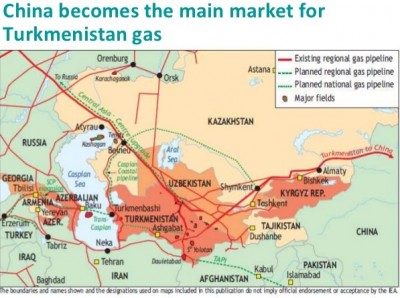 For first time, Turkmenistan announced exaction volumes of planned gas production and export, which the country is to increase in 2015.

The statement from Ashgabat came last week while Russia announced that Turkmen gas imports will decrease by 6.5 billion cubic meters per annum (bcm/a) to 4 bcm/a in 2015.

Russian giant Gazprom’s Deputy Chairman Alexander Medvedev said that based on 2015 contracts, Russia’s gas purchases from Uzbekistan also will decrease from 3.8 billion in 2014 to one bcm/a in current year.

Russia purchased 19.6 bcm of Turkmen gas in 2012 but gradually decreased this volume.

Turkmenistan reportedly exported approximately 6 bcm of gas to Iran in 2014, which increased the volume since fall to above 35 to 38.5 mcm/d. It is expected that the country’s gas export to Iran stood at around 9 to 10 bcm in 2014.

According to China’s Custom report released on January 26th, China recieved 25.9 bcm of Turkmen gas in 2014, less than the 30 bcm/a agreed between state-owned companies Turkmengaz and China National Petroleum Corp. The two companies also agreed to boost China’s imports of Turkmen gas to 40 Bcm/a in 2015. 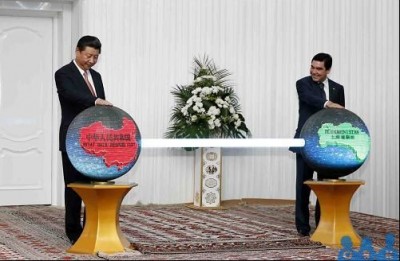 For the first time, Turkmenistan unveiled the exact volume of projected gas production and export, saying that the country is to increase gas production by 9 percent to 83.8 bcm/a. It is also aimed exporting 48 bcm/a of gas in 2015.

In this regard, Iran increased gas production by 100 mcm/d in 2014 and projected to increase the volume as much as this figure for 2015. It is not expected to import more Turkmen gas. Therefore, Turkmenistan has at least 34 bcm/a of gas to export to China.

This figure could easily increase.

Concering the figures that Turkmenistan’s government announced – producing 83.8 bcm and exporting 48 bcm of gas means that Turkmenistan plans to consume 35.8 bcm of natural gas domestically however the domestic consumption level is much less than this figure.

According to BP statistics, Turkmenistan’s total gas consumption was around 22.3 bcm in 2013.

This country reportedly increased the power export during last year, but not so significantly that change the gas consumption level considerably.

Regarding the aforementioned figures, Turkmenistan can deliver even 40 bcm of gas to China during the current year to fulfill its obligation based on contracts.

Beijing is planning to increase its gas imports from Turkmenistan to 65 bcm/a by 2020.

The routes of gas delivery

The Central Asia-China Gas Pipeline starts at Turkmen-Uzbek border city Gedaim and runs through central Uzbekistan and southern Kazakhstan before reaching Horgos in China’s Xinjiang Uygur Autonomous region. Currently the Gas Pipeline has three lines in parallel, each running for 1,830 kilometers. Construction of Line A/B commenced in July 2008. With a pipe diameter of 1,067mm, Line A became operational in December 2009, and Line B became operational in October, 2010. A delivery capacity of 30 billion cubic meters per annum was reached by the end of 2011.

Construction of Line C was started in September 2012. With a designed capacity of 25 billion cubic meters per annum, Line C’s pipe diameter is 1,219mm, 152mm larger than Line A/B. The overall welding work of the pipeline was completed at the end of 2013.

On May 31, 2014, at the initial station of the Central Asia-China Gas Pipeline in Uzbekistan, the gas valve was turned on to boost natural gas from Turkmenistan to Line C, indicating the new transnational pipeline jointly built by CNPC and its Central Asian counterparts has become operational.

Upon completion of all supporting facilities of Line C by the end of 2015, the overall delivery capacity of the Central Asia-China Gas Pipeline will hit 55 billion cubic meters per annum.

lham Shaban is Director of the Azerbaijan

Centre for Oil Studies, in Baku.