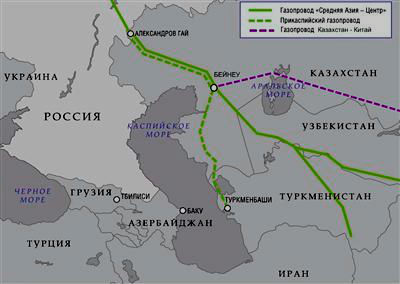 Russian Gazprom plans to reduce the volume of Turkmen and Uzbek gas purchases nearly 10 billion cubic meters and replace these volumes with its own gas in 2015, RIA- Novosti news agency reported on Feb 3.

The deputy chairman of the company Alexander Medvedev made such an announcement while speaking at an investor day in Hong Kong.

“Gazprom, thanks to investments to the mining complex and the transport sector requires no purchase of gas from abroad, regardless the source. Gazprom has enough resources to meet the needs of the market of any region of the Russian Federation, as well as to ensure supplies of gas to our customers both in Europe and in the future, in Asia, ” Medvedev said.

Gazprom Open Joint Stock Company is the largest producer of natural gas in the world and the major Russian company.

Its major business lines are geological exploration, production, transportation, storage, processing and marketing of hydrocarbons, as well as generation and marketing of heat and electric power. The Russian government has a controlling stake in the company.