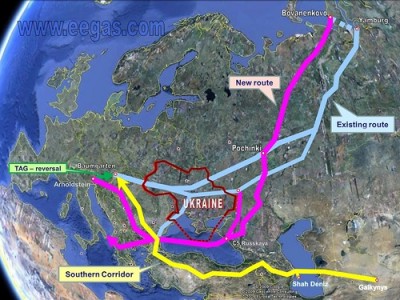 The first meeting of the Advisory Council of the Southern Gas Corridor project is very important, as it aims at setting up a permanent coordination mechanism among all states and parties involved in the project and in its different stages (SCP, TANAP and TAP), Giampaolo Cutillo, Italian ambassador to Azerbaijan told Trend on Feb.10.

The ambassador said Italy is fully committed and supportive of the
Southern Gas Corridor project which is of strategic importance both for his country and the European Union (EU).

“We believe that this meeting [the first meeting of the Advisory Council of the Southern Gas Corridor project] will enhance the understanding among its different stakeholders,” said the diplomat.

Baku will host the first meeting of the Advisory Council of the Southern Gas Corridor on Feb.12. The participation of the following officials in the meeting has already been confirmed: Italian Deputy State Secretary for Economic Development Claudio de Vincenti, energy ministers of Greece, Georgia and Bulgaria, Panagiotis Lafazanis, Kakha Kaladze and Temenujka Petkova, as well as the Vice President of the European Commission, Maros Sefcovic.

Representatives of all transit countries of the Southern Gas Corridor (Georgia, Turkey, Greece, Italy, Albania and Bulgaria) have been invited to participate in the meeting.

Southern Gas Corridor is one of the priority energy projects for EU. This project is aimed at diversification of routes and sources of energy supply and thereby increase EU’s energy security.

A final investment decision was made on Dec.17, 2013 on the Stage 2 of the Shah Deniz offshore gas and condensate field’s development. The gas produced at this field will first go to the European market (10 billion cubic meters), while six billion cubic meters of gas will be annually delivered to Turkey.

The contract for development of the Shah Deniz offshore field was signed on June 4, 1996. The field’s proven reserve is equal to 1.2 trillion cubic meters of gas and 240 million metric tons of condensate.

As part of the second stage of the field’s development, gas will be exported to Turkey and European markets by expanding the South Caucasus gas pipeline and the construction of Trans-Anatolian (TANAP) and Trans-Adriatic (TAP) gas pipelines.