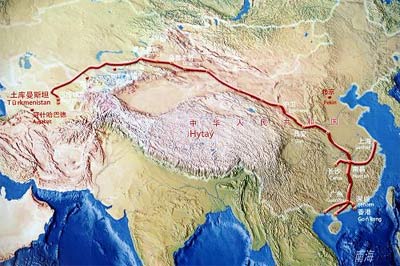 At the session of the Cabinet of Ministers on February 6, 2015 Turkmenistan President Gurbangulu Berdymohammadov gave some instructions to the administration of the oil and gas industry concerning further development of this field.

According to the experts’ estimates, potential hydrocarbon resources of the country total 71.2 billion tons of conditional fuel, of which 53 billion tons fall to onshore and 18.2 billion tons to the offshore sections. A significant part of this volume – over 70% – falls to natural gas.

In September 2013 Turkmenistan and Chinese leaders signed the agreement to build the fourth branch of the gas pipeline with the capacity of 25 billion cub.m. of gas a year. The branch will pass from Uzbekistan to China through Uzbekistan, Tajikistan and Kyrgyzstan. The pipeline construction is planned to be completed in 2017.

Therefore, by 2017 carrying capacity of the pipeline to the east will be increased up to 80 billion cub.m. According to the agreement signed between the Chinese National Petroleum Corporation (CNPC) and the state-run company Turkmengas, by the end of 2021 Turkmenistan will export 65 billion cub.m. of gas a year.