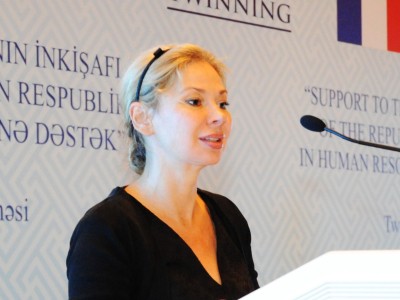 Azerbaijan is today one of the EU’s major and most reliable energy partners and the Southern Gas Corridor is at the center of our strategic energy partnership, Head of the EU Delegation to Azerbaijan Malena Mard told Trend Feb.11.

“Our objective is that the entire infrastructure along the corridor would be operational in time by 2019-2020,” she said.

Mard added that in line with the European Energy Security Strategy, the Southern Gas Corridor remains a key project for the common objective of diversification of sources and suppliers.

“The Advisory Council meeting on February, 12 will be a very important event on high political level to promote the Southern Gas Corridor,” she said.

Baku will host the first meeting of the Advisory Council of the Southern Gas Corridor on Feb.12. The participation of the following officials in the meeting has already been confirmed: Italian Deputy State Secretary for Economic Development Claudio de Vincenti, energy ministers of Greece, Georgia and Bulgaria, Panagiotis Lafazanis, Kakha Kaladze and Temenujka Petkova, as well as the Vice President of the European Commission, Maros Sefcovic.

Representatives of all transit countries of the Southern Gas Corridor (Georgia, Turkey, Greece, Italy, Albania and Bulgaria) have been invited to participate in the meeting.

Southern Gas Corridor is one of the priority energy projects for EU. This project is aimed at diversification of routes and sources of energy supply and thereby increase EU’s energy security. The Southern Gas Corridor envisages the delivery of gas from Azerbaijan’s Shah Deniz gas condensate field to Europe.