The price of oil fell to its lowest level in five and a half years Monday, with both Goldman Sachs and Societe Generale lowering their projections.

Oil price forecasting is a hazardous business. In June 2014, Barclays was forecasting a $109 a barrel price in the fourth quarter, nearly $50 a barrel more than what prices actually averaged in the fourth quarter. On Monday, the price of the international benchmark crude, Brent, fell to below $48 a barrel in London. Gasoline prices fell below $2 a gallon in the Midwest and gulf coast last week.

In an interview with the respected industry newsletter Argus Global Markets published last Friday, Saudi Arabia’s oil minister Ali al-Naimi was asked whether the world would ever see $100 a barrel oil again and he said: “We may not.”

Here are a few things to consider. 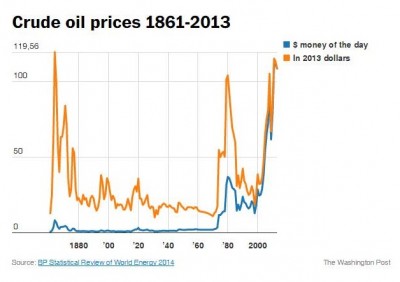 First, it’s important to keep today’s prices in perspective. Today’s price level – and the enormous cyclical swing in prices since June – is not a “new normal” for oil; it’s the old normal.

The world has just endured eight years of historically high crude oil prices,higher than any time since the 1979 to 1983 period when the Iranian Revolution and Iran-Iraq war disrupted oil supplies from two of the world’s biggest oil exporters. And that’s after adjusting for inflation.

So when people talk about cheap oil, they’re talking about crude oil that is still more expensive than the average price from 1986 through 2004.

Second, there is always a delay between price signals and actual changes in production and demand. In the past four years, with very high oil prices, we’ve seen a mad dash to invest in new projects, from North Dakota to Russia’s Arctic. Production from those projects is still coming on line even as new exploration is scaled back. In November, Petrobras announced the discovery of a huge new offshore field. In December, even as oil prices fell, Iraq’s oil production rose about half a million barrels a day, the result of years of investment.

Eventually, there will be a rebound in prices as exploration is postponed and consumption goes up. But for the next several months, the oversupply could get bigger by 1 million barrels a day, Barclays said in a new note to investors.

Third, there is Saudi Arabia. The kingdom is the driving force behind the drop in prices because it has grown weary of cutting its own oil output in order to prop up prices enjoyed by other countries, both in OPEC and especially outside of OPEC.

How determined is Saudi Arabia? Very. It is now waiting for low prices to discourage investments in new projects such as Russia’s Arctic, Canada’s oil sands, U.S. shale drilling, and Brazil’s costly sub-salt projects in deep offshore waters. Yes, these are long-term projects that rely on long-term oil prices, but companies still tend to pay a lot of attention to what’s happening now.

And Saudi Arabia can afford to wait. Even though prices have tumbled, Saudi Arabia – unlike Venezuela – has a large treasure chest of savings from past years and can weather a long period of low prices. The government is assuming a 32 percent drop in oil-related revenues. In addition, Saudi Arabia has some of the world’s lowest production costs, rivaled only by Iraq and some parts of Russia. Production costs in Saudi Arabia are about $4 to $5 a barrel, Naimi said recently.

The Saudi oil minister al-Naimi’s interview in Argus Global Markets should send chills down the spines of oil producers. He noted that “sooner or later, however much they hold out” high cost oil projects such as wells in Brazil’s sub-salt offshore region, off the coast of west African, and in the forbidding Arctic would have to scale back in response to low prices. “Will this be in six months, in one year, two years, three years? God knows,” said Naimi. “I say Gulf countries, and particularly the kingdom, have the ability to hold out.”

Naimi also brushed aside the plight of Russia and Iran, saying that they were not only suffering from low oil prices but also “from their political behavior” that had led to sanctions. “Their problem is more basic” than oil prices, he said.

How long will Naimi have to wait? The surplus oil production is a small percentage of global consumption, so it’s possible that a disruption in supplies in, say, Libya and an uptick in consumption in the United States, Europe and China could bring things into balance. But consumption isn’t just a matter of crude oil prices. Gasoline subsidies have been slashed in Indonesia and India, fuel efficiency standards are pushing U.S. carmakers, and Europe’s economy remains in the doldrums.

Meanwhile, new production keeps coming online. Take MEG Energy, for example, a producer in Canada’s costly oil or tar sands. MEG has slashed its capital spending budget by 75 percent this year, but its production will still go up about 20 percent.

How fast will that shale oil activity drop off? So far, not much. The Baker Hughes rig count for onshore U.S. drilling fell to 1,684 down 60 from the week before but still seven higher than a year earlier. Because shale oil wells produce about half their output in 18 to 24 months, this activity should be highly sensitive to prices.

But lower drilling costs, steady improvements in fracking techniques and a focus on lowest cost areas help offset the effect of lower prices. The EIA said in December that “projected oil prices remain high enough to support development drilling activity in the Bakken, Eagle Ford, Niobrara, and Permian Basin, which contribute the majority of U.S. oil production growth.” The EIA said it expects U.S. crude oil production to average 9.3 million barrels per day in 2015. That’s 200,000 barrels a day less than EIA’s earlier projections, but it still means an increase of 700,000 barrels a day from 2014.

Sooner or later, though, the cycle will turn. Naimi in the interview with Argus sounded confident, and patient. “The bet is about the timing of the price rise,” he said, “not about if it will occur.”