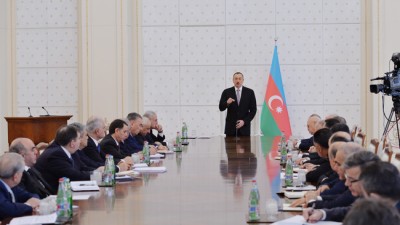 We have done a very active work and started implementation of the Southern Gas Corridor. Azerbaijani President Ilham Aliyev made this statement at the session of the Cabinet of Ministers on January 10, 2015, which was devoted to the results of socio-economic development in 2014, reported web site www.president.az.

Azerbaijani President said that we have done a lot of work related to implementation of this project.

“If it is not Azerbaijan’s strong will, this project would have never been implemented,” added Ilham Aliyev.

Azerbaijani President said: “Azerbaijan is the author of the Southern Gas Corridor project. Azerbaija is also the driving force of the project. Everybody must know that.”

Ilham Aliyev reminded that the foundation of the Southern Gas Corridor was laid in September 2014. “This is a historical event. The project will accelerate our long-term development even more. This project is equal to the Contract of The Century (Azeri-Chirag-Guneshli project).  This project is now called Project of the 21st Century, said Azerbaijani President.

Ilham Aliyev also said that “we have managed to achieve the most advantageous conditions for Azerbaijan within the framework of international cooperatioon.”

He also emphasized cooperation between Azerbaijan and its partners. “We would not be able to implement this project without our partnes. The proejct will demand more coordination, because many countries and companeis are involved in it.”

“For this reason this is a historical event. Azerbaijan has demonstrated its leadership skills in this field,” said President.

Having stresed that political and economic interests of the country will be guaranteed, Ilham Aliyev addd that Azerbaijan is turning into the counry irreplaceable for the European consumers.

“What does this mean? There is no need to explain it for a long time. We play our role in safeguarding energy safety of Europe. This role will be growing gradually, because Azerbaijan is the only new source of gas for Europe. We have undertaken such a responsibility. I am sure that we will sccessfully implement the project as well, because until now there have been no projects, which we would have started and failed to implement. I am sure the Southern Gas Corridor  will be also fully impemented,” said Ilham Aliyev.