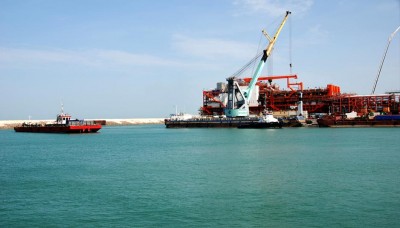 Kashagan is an gigantic oil and gas field located in Kazakhstan’s section of the Caspian Sea and is one of the largest and most complex hydrocarbon development projects in the world.

Commercial production at Kashagan was supposed to kick off and start brining profit to Kazakhstan more than a year ago but gas leakages were discovered shortly after the long-delayed pilot start in September 2013, and the production was suspended. It was later concluded that all the pipes at the field needed replacement. According to preliminary estimates, the replacement of the entire pipeline will cost as much as $3 billion.

The field is developed by an international consortium of oil majors under a Production Sharing Agreement (PSA) with Kazakhstan. According to its terms Kazakhstan will not reimburse the costs associated with resumption of the production at the field, Tengrinews reports citing Ak Zhaik.

North Caspian Operating Company B.V. (NCOC) Managing Director Stephen DeMayo declared earlier that the Kazakhstani side would not be paying for the replacement of the pipeline. Instead, this will be done by NCOC partners or their subcontractors. The information was confirmed by Kazakhstan’s Vice-Minister of Energy Uzakbay Karabalin.

“On December 13, 2014 the Agreement on the settlement between Kazakhstan and contracting companies of the North-Caspian project was signed, which among other things had settled all the issues related to the “primary” pipeline (reference: http://energo.gov.kz/index.php?id=2013),” Vice-Minister Karabalin said. “In particular, the Contractor and Kazakhstan agreed that all the costs associated with the design, manufacturing, maintenance, and operation of the “primary” pipelines are non-refundable, and accordingly, Kazakhstan will suffer no losses in this regard.”

In his written answers to Ak Zhaik, Kazakhstan’s Vice-Minister Karabalin said that investigation into the causes of the pipeline failure was almost completed and the final report would be published in 2015. According to preliminary information, small cracks appeared in the pipes because of presence of zones of excess metal hardness, which are more susceptible to acidic environment under pressure.

An expert who asked to remain anonymous suggested that the erosion of the pipes at Kashagan was caused by improper welding during installation of the pipes and insufficient quality control. He drew these conclusion from the fact that the fragile excess-metal-hardness-zones in the pipes are found near welded joints – they appeared as a result of welding.

In combination with the tension stress that pipes experience during operation, these factors caused the cracks and leaks, even though the Contractor did choose the correct type of pipes for the operation. Similar pipes are used for oil-and-gas gathering and transportation at Tengiz and Karachaganak projects (large oil and gas fields developed by foreign oil giants in Kazakhstan) and – even after years of operation – have not manifested any of the symptoms found in the Kashagan pipes, the expert said.

Ak Zhaik asked the Kazakh Vice-Minister who exactly from Agip KCO, the consortium’s operator, or other companies participating in the project was responsible for the failure of the pipeline: a supplier of low-quality pipes or the companies that installed them.

“The question of the responsibility of the Contractor (Agip KCO and other companies participating in the project) was also settled by signing of this Agreement. Employees of KazMunaiGas National Company or PSA LLP were not directly involved in construction of the “primary” pipelines. Under the North Caspian Sea PSA, the responsibility for conducting petroleum operations lies entirely with the Contractor for the project,” he replied.

The anonymous expert said that the failures could be a result of many years of delays in the Kashagan project. The production was initially supposed to be brought online in 2005. The next deadline was set to 2008 and so on. “Most of the equipment for the project was purchased starting in 2005 and after with an expectation that the production will be launched in 2008. The equipment was supplied in a non-stop flow and it had to be installed at once, but the project was delayed, the construction deadlines were pushed back. For many years the equipment remained piled up in the open,” he said.

As for the exact cost of the replacement, Vice-Minister Karabalin said that the Operator was in talks with several of the world’s top pipe producers. The final cost of the replacement will be known after the talks are completed and contracts are signed, especially since the cost will greatly depend on the specifications of the pipes that NCOC will be purchasing.

It probably will cost a pretty penny.