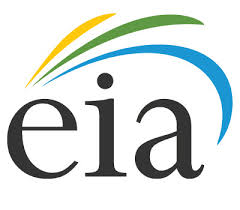 EIA expects global oil inventories to continue to build in 2015, keeping downward pressure on oil prices. The forecast Brent crude oil price averages $58/bbl in 2015, $11/bbl lower than projected in last month’s STEO. Based on current market balances, EIA expects downward price pressures to be concentrated in the first half of 2015 when global inventory builds are expected to be particularly strong. EIA projects that Brent prices will reach a 2015 monthly average low of $49/bbl in January and February, and then increase through the remainder of the year to average $67/bbl during the fourth quarter.

The monthly average WTI crude oil spot price fell from an average of $76/bbl in November to $59/bbl in December. Like Brent crude oil prices, WTI prices have decreased considerably, with monthly average prices falling by more than 44% as of December after reaching their 2014 peak of $106/bbl in June. EIA now expects WTI crude oil prices to average $55/bbl in 2015, $8/bbl lower than in last month’s STEO, and $71/bbl in 2016. The discount of WTI to Brent crude oil is forecast to widen slightly from current levels later in the forecast, averaging $3/bbl in 2015 and $4/bbl in 2016.

However, the current values of futures and options contracts suggest high uncertainty in the price outlook (Market Prices and Uncertainty Report). WTI futures contracts for April 2015 delivery, traded during the five-day period ending January 8, averaged $51/bbl. Implied volatility averaged 48%, establishing the lower and upper limits of the 95% confidence interval for the market’s expectations of monthly average WTI prices in April 2015 at $34/bbl and $76/bbl, respectively.

The 95% confidence interval for market expectations widens considerably over time, with lower and upper limits of $28/bbl and $112/bbl for prices in December 2015. Last year at this time, WTI for April 2014 delivery averaged $98/bbl, and implied volatility averaged 16%. The corresponding lower and upper limits of the 95% confidence interval were $86/bbl and $113/bbl.

The recent declines in oil prices and associated increase in oil price volatility continue to contribute to a particularly uncertain forecasting environment, and several factors could cause oil prices to deviate significantly from current projections. Among these factors is the responsiveness of supply to lower prices. Despite OPEC’s recent decision to leave its crude oil production target at 30 million bbl/d, key producers could decide to reduce output, tightening market balances. The level of unplanned production outages could also vary from forecast levels for a wide range of producers, including OPEC members Libya, Iraq, Iran, Nigeria, and Venezuela. The degree to which non-OPEC supply growth is affected by lower oil prices will also affect market balances and prices.

Several OPEC and non-OPEC oil producers rely heavily on oil revenues to finance their fiscal budgets. Some producers have already started adjusting their upcoming budgets to reflect the crude oil price decline. If crude oil prices continue to fall or are sustained at a lower level, then oil-dependent producers will have to make tough policy decisions. These decisions could potentially lead to austerity programs and fuel subsidy cuts that could spark social unrest, leaving some countries vulnerable to supply disruptions if protesters target oil infrastructure. Potential new supply disruptions are a real possibility in a lower-than-expected price climate and present a major uncertainty in the world oil supply forecast.