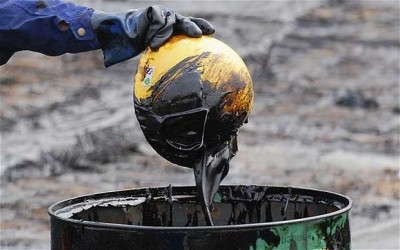 OPEC will stand by its decision not to cut output even if oil prices fall as low as $40 a barrel and will wait at least three months before considering an emergency meeting, the United Arab Emirates’ energy minister said.

OPEC isn’t planning to change its Nov. 27 decision to keep the group’s collective output target unchanged at 30 million barrels a day, Suhail Al-Mazrouei said.Venezuela supports an OPEC meeting given the price slide, though the country hasn’t officially requested one, an official at Venezuela’s foreign ministry said Dec. 12. The group is due to meet again on June 5.

“We are not going to change our minds because the prices went to $60 or to $40,” Mazrouei told Bloomberg yesterday at a conference in Dubai. “We’re not targeting a price; the market will stabilize itself.” He said current conditions don’t justify an extraordinary OPEC meeting. “We need to wait for at least a quarter” to consider an urgent session, he said.

OPEC’s 12 members pumped 30.56 million barrels a day in November, exceeding their target for a sixth consecutive month, data compiled by Bloomberg show. Saudi Arabia, Iraq and Kuwait this month deepened discounts on shipments to Asia, feeding speculation that they’re fighting for market share amid a glut fed by surging U.S. shale production. The Organization of Petroleum Exporting Countries supplies about 40 percent of the world’s oil.

Brent crude, a pricing benchmark for more than half of the world’s oil, gained 1 percent to $62.44 a barrel on the ICE Futures Europe exchange at 1:07 p.m. today in London. The contract closed on Dec. 12 at the lowest since July 2009. West Texas Intermediate crude, which has slumped 41 percent this year, fell 9 cents to $57.72 in New York.

OPEC decided at its last meeting to keep output unchanged to protect the group’s market share even if it has a negative effect on crude prices, the official Kuwait News Agency reported yesterday, citing Oil Minister Ali al-Omair.

An increase of about 6 million barrels a day in non-OPEC supply, together with speculation in oil markets, triggered the recent drop in prices, OPEC Secretary-General Abdalla El-Badri said yesterday at the Dubai conference, without specifying dates for the higher output by producers outside the group such as the U.S. and Russia. Prices will rebound soon due to changes in the global economic cycle, he said, without giving details.

“If the shale oil producers keep their current production level without further growth in 2015 (like OPEC did), the market will stabilize,” Mazrouei said today on Twitter. “It’s not logical nor fair to ask OPEC to reduce their production and not ask the other producers to stop their expected growth in supply!!”

U.S. producers may boost output still further from the highest rate in more than three decades as costs decline almost as fast as oil prices, according to Goldman Sachs Group Inc.

“Oil producers can spend less to get the same or potentially even more in terms of production,” the bank said today in an e-mailed report. “While reductions in capex are coming faster than expected, it is unlikely to translate into less supply.”

OPEC kept its output target unchanged because the group was uncertain whether a cut ranging from 1 million to 1.5 million barrels a day would have boosted prices, El-Badri said. The group wasn’t seeking to put pressure on the U.S. or Russia by maintaining output, he said.

“Our expectation in OPEC is that after 2020, the oil industry in the U.S. will decline” due to the nation’s low reserves, El-Badri said. The U.S. won’t become self-sufficient in oil and will continue to depend on Middle Eastern supply, he said.

U.S. oil drillers last week idled the most rigs in almost two years as crude tumbled below $60 a barrel. Producers including ConocoPhillips (COP) have curbed spending, and the number of rigs is declining from a record 1,609, threatening to slow the shale-drilling boom that has propelled U.S. production to the highest level in three decades.