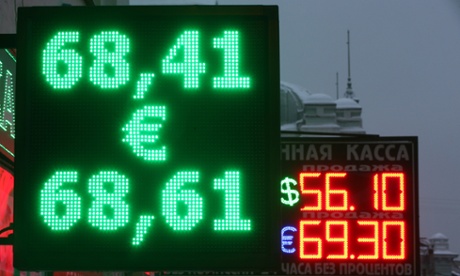 Investors are concerned that the freefalling oil price and its effects on energy-dependent Moscow will further harm the world economy.

Shares in the City closed at their lowest level of 2014 on Monday night as fears that the plunging oil price will prompt economic collapse in energy-dependent Russia led to a global stock market sell-off.

A fresh slide in the cost of crude to a five-and-a-half-year low sent the rouble into freefall against the US dollar, sending tremors through financial markets in Asia, Europe and North America.

Investors dumped shares as they weighed up the risk that a deepening economic crisis would destabilise Russia and make it more difficult for the west to deal with Vladimir Putin, adding to geopolitical tensions in eastern Europe and the Middle East.

In London, the FTSE 100 index of leading shares fell for the sixth day in a row, with energy companies particularly hard hit by the drop in Brent crude to around $61 a barrel. The FTSE has lost 9% since the start of last week and closed on Monday night at 6717 points – after Monday’s 118-point fall it is more than 500 points lower than its level at the start of the year.

Although the near-halving of the cost of crude from $115 a barrel since the summer should eventually boost global growth by increasing consumer spending power and reducing business costs, investors are concerned that lower oil prices reflect softer demand from a weakening global economy. The slowdown in China has played an important factor in the decline in oil prices.

Major European bourses lost 2% of their value on a day that also cost the rouble more than 10% of its value against the US dollar despite attempts by Russia’s central bank to arrest the currency’s decline.

The authorities in Moscow followed last week’s increase in interest rates by buying roubles on the foreign exchanges, but failed to prevent the biggest one-day decline in the currency since Russia’s debt default in 1998. Neil Shearing, chief emerging market economist at Capital Economics, said there was now speculation that Russia would resort to capital controls to defend the rouble.

Oil and gas account for 70% of Russia’s exports and Moscow needs an oil price in the region of $100 a barrel to balance its budget. The central bank said that the economy would contract by 4.5% in 2015 if the oil price remains at its current level for the next 12 months.

The global oil price was under renewed downward pressure after Opec stressed it had no immediate intention of curbing production. Some analysts believe that Saudi Arabia and the US are deliberately pushing oil prices lower in order to pressure Putin over Ukraine. Washington hinted on Monday that it was contemplating tougher sanctions against Russia for its support to separatists in eastern Ukraine.

Neil Barnett, of the Centre for Policy Studies, said: “The bad news for Russia is that the outlook for oil prices appears weaker and weaker. This week the International Energy Agency cut its demand growth forecast. In combination with still-growing US production and Saudi determination to keep prices low, it means that prices next year are likely to fall yet further.”

Laith Khalaf, senior analyst at Hargreaves Lansdown, said: “The pace of the fall has been breathtaking, with oil-related stocks bearing the worst of the pain. We are now closing in on a technical correction [10% fall] after just six abysmal trading sessions. To give some perspective, we already witnessed a 10% fall in the UK market in September and October of this year, but this took place over six weeks, not six days. The positive to take away is that a lower oil price should put more money into the pockets of UK consumers and many UK businesses, but this will take some time to feed through into expenditure and profits. In the meantime, investors would as usual be well-advised to keep focused on the long term– equity investing is a marathon, not a sprint.”