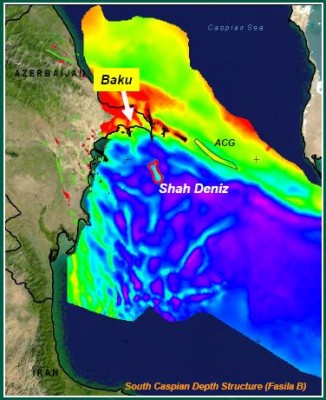 Operator of the project for development of Azeri-Chirag-Guneshli (ACG) and Shah Deniz fields plans to conduct seismic survey on these fields in 2015.

3D seismic survey is planned to be conducted on the northern part of the Shah Deniz gas condensate field, which has not been covered before.

4D seismic survey is planned to be conducted on ACG in 2015. This means that repeated seismic survey, processing and interpretation of data will be conducted to see the changes that occurred in the reservoirs during the period of development, which started from the Chirag field in 1997.

BP jointly with SOCAR has been working on the plan for development of the field till 2024, when the contract expires. The new data will allow drafting a more efficient plan, which will prolong life of the field by several more years and increase its productivity by several percent.

It is especially important for ACG, because of a gradual reduction of pressure in the beds and water blockage in the wells.

4D seismic survey will allow identify the resources, which have not been extracted, because of the water blockage in the bed, and start development of the perspective reservoirs, which were missed during the initial extraction.

The seismic survey will be performed by Caspian Geophysical joint venture, while processing and interpretation of the data is responsibility of the customer.

Carrying out works right on two offshore sites will allow reducing costs for the vessel mobilization. And it will be, supposedly, conducted in summer.