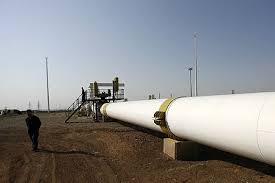 The Trans Adriatic Pipeline (TAP) is ready to transport additional gas volumes when they will be available in the future.

The project’s representative told Trend that currently TAP is committed to transporting 10 billion cubic meters of gas from the Shah Deniz-2 project.

“In the future, TAP can increase its capacity to around 20 billion cubic meters per annum when more gas volumes become available to transport,” TAP’s representative said commenting on the perspectives for transporting gas from other sources, in particular, from Turkmenistan.

At the same time, earlier TAP’s representative said Iran is not considered as the supply source for the project as long as the issues related to Iranian nuclear program are in place.

“TAP will not transport any sanctioned gas under the current political circumstances,” the source said.

TANAP may transport gas both from Azerbaijan and Turkmenistan to Europe through Turkey’s territory, Erdogan said at the time.

After the high-level negotiations held on Nov.7, Turkmenistan’s Turkmengaz State Concern and Turkish company Atagaz signed a framework agreement on cooperation in the purchase and sale of natural gas.

The best option to transport Turkmen gas to Europe is to to lay a 300-kilometer gas pipeline through the Caspian Sea to the coast of Azerbaijan – Trans-Caspian gas pipeline.

The EU issued a mandate in September 2011 to start negotiations on working out an agreement between EU, Azerbaijan and Turkmenistan on the Trans-Caspian project.

Azerbaijan earlier expressed readiness to offer its territory, transit opportunities and infrastructure for the implementation of this project.