Turkmenistan is the sixth largest natural gas reserve holder in the world and in 2012 was the second largest dry natural gas producer in Eurasia, behind Russia. The last two decades since the collapse of the USSR have seen Turkmenistan broaden its export markets from its traditional sole customer Russia to Iran, China, and now possibly – the West.

Another suitor has arrived for Turkmen gas exports – Turkey, whose President, Recep Tayyip Erdogan, spent Nov. 6-8 on a state visit to Ashgabat, assiduously promoting Turkmenistan supplying gas to the proposed Trans-Anatolian natural gas pipeline project (TANAP). Erdogan’s visit follows up on a framework agreement signed on Oct. 7 between Turkmen state gas company Turkmengas and private Turkish firm Atagas for the purchase and sale of Turkmen gas for TANAP, with the two sides modestly declining to disclose the terms of the agreement. After transiting Turkey, TANAP could supply Eastern Europe with gas, helping alleviate EU dependency on Russian gas, a consideration which has increased since the Ukrainian crisis developed.

As envisaged, TANAP will transport 16 billion bcm of gas annually from Azerbaijan’s Shah Deniz II field in the Caspian, one of the world’s largest gas fields, which is being developed by a BP-led consortium with its capacity set to rise to 23 bcm by 2023 and to 31 bcm by 2026. The only fly in the ointment is the fact that a subsea pipeline between Turkmen and Azeri Caspian sectors would need to be laid from Turkmenbashi to Baku, from where Turkmen gas would enter TANAP, and the offshore water and seabed have yet to be definitively subdivided between Caspian nations Azerbaijan, Iran, Kazakhstan, Russia and Turkmenistan. But in most projections of potential divisions the Azeri and Turkmen offshore waters abut, so construction of the pipeline would not necessarily be an insurmountable problem.

Turkmenistan is now a leading natural gas exporter. In 2012 Turkmenistan exported 1.6 tcf via pipelines. Over half of Turkmen exports went to China, with Russia and Iran as the other major importers of Turkmenistan gas, though their imports are dwindling. Turkmenistan has signed several natural gas contracts with China, most recently in September 2013, and will supply 2.3 tcf of natural gas to China by 2020 through a network of parallel gas pipelines running across Central Asia.

Despite this roseate picture, the hydrocarbon-rich country lacks sufficient pipeline infrastructure in the short term to export greater volumes of hydrocarbons. However, public investment and the start of production at Galkynysh, one of the world’s largest natural gas fields boosted its economy in 2013. According to the World Bank, Turkmenistan’s 5.24 million citizens in 2013 saw average wages rise 11 percent in real terms while enjoying a per capita income of more than $7,800 and a national GDP of $41.85 billion, up from $22.14 billion only three years earlier.

Turkmenistan has emerged relatively late on the Western energy radar, but over the last three years has done so with a vengeance. One of the reasons that its traditional customer Gazprom suddenly and unilaterally drastically cut its imports of Turkmen gas on April 9, 2009, resulting in an explosion at the 302nd-mile segment of the Soviet-era Truboprovodnaiia sistema Sredniaia Aziia-Tsentr (the Central Asia-Center, or SATS, pipeline system) SATS-4 Davletbat-Daryalik pipeline between the Ilyaly and Deryalyk compressor stations near the Turkmen-Uzbek border, halting Turkmen natural gas exports to Russia, which had been running at 42-45 billion cubic meters (bcm) per annum. Gazprom only resumed imports in January 2010, but at a much reduced level. 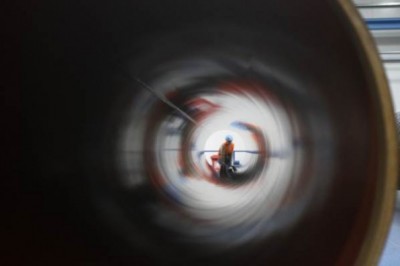 Two new factors then intervened – the confirmation of massive new gas reserves, and an eager new customer in the form of China.

In May 2011 a report by the respected British audit firm Gaffney, Cline and Associates on Turkmenistan’s gas reserves concluded that the South Yolotan natural gas superfield, discovered in 2006, contains reserves of more than 20 trillion cubic meters (tcm) of natural gas, enough to satisfy European demand for more than 50 years and making it the second largest gas field ever found. It should be noted that when in 2006, following the field’s discovery, Turkmenistan’s megalomaniacal ruler, Saparmurat “Turkmenbashi” Niyazov claimed that the discovery boosted the country’s reserves up to 24 tcm of natural gas, his claims were taken as mere braggadocio, with BP calculating them at slightly more than 1/10th that amount. A similar thing happened two years later, when Gaffney, Cline and Associates first audited South Yolotan, and their findings were initially ridiculed as overstated.

As for the future, October 29−November 4 an International Monetary Fund (IMF) delegation led Bjorn Rother visited Ashgabat, after which Rother said, “Growth in Turkmenistan remains strong and is projected to reach 10−11 percent in 2014 on the back of increasing gas exports to China and large public investment. Inflation is likely to remain in the low single digits. With large buffers, government efforts to diversify gas export routes, and limited links with international financial markets, the impact of spillovers from economic slowdowns in the region is limited.” Rother added a cautionary note, “Notwithstanding the favorable economic prospects, the Turkmen economy is vulnerable to developments in hydrocarbon markets.”

Nevertheless, Turkmenistan’s projected 10−11 percent growth this year stands in stark contrast to most of its post-Soviet neighbors, as last May the IMF reported, “Economic growth in the Caucasus and Central Asia (CCA) is expected to decline from 6½ percent in 2013 to 6 percent in 2014, mainly because of weakening growth momentum in emerging market trading partners (particularly, China, Russia, and Turkey) and a temporary decline in oil output growth in Kazakhstan. Risks remain tilted to the downside. In particular, a slowdown in emerging market trading partners may weaken exports, foreign direct investment, and remittances.”

But Turkmenistan remains hostage to the vagaries of international energy markets, as the country’s hydrocarbon sector accounts for roughly 35 percent of the nation’s GDP, 92 percent of exports and 80 percent of fiscal revenues, making abrupt declines in global hydrocarbon prices the key risk to Turkmenistan’s otherwise roseate growth projections.

And Turkmenistan is not China’s sole Eurasian supplier of natural gas. On Nov. 9 China and Russia signed two massive energy agreements, including one to help start early construction of the western route of the China-Russia natural gas pipeline through the Altai area of the Xinjiang Uygur autonomous region. The pipeline is scheduled for completion in 2020 and will provide 30 billion cubic meters of natural gas a year to China.

However, as in 2013 China consumed about 169 billion cubic meters of natural gas, Turkmen and Russian gas will not be vying for supremacy in the seemingly bottomless Chinese market anytime soon. Accordingly, despite IMF naysayers, Turkmenistan’s “favorable economic prospects” seem assured for the foreseeable future, especially now that Turkey has stepped up to the plate to offer Europeans an alternative to Russian gas.