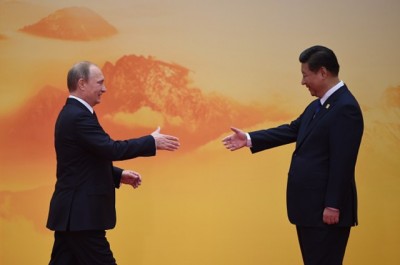 The latest China-Russia gas deal, declared on the arrival of Russian President Vladimir Putin in Beijing this week, got far more attention than it deserved.  Eager to add fuel to the narrative of an emerging strategic relationship between Beijing and Moscow, commentators pronounced the deal as a game-changer, a symbol of a new partnership between long-estranged countries.  Yet, a look beyond the words of Russian gas executives (always a good idea) suggests that there is much more hype than substance here. The deal seems to be little more than an effort to ensure that Putin did not leave China empty-handed, particularly in the wake of a big U.S.-China declaration on climate.

What, in fact, did Putin and Chinese President Xi Jinping agree to?  The memorandum of understanding they signed differs in some significant ways from the previous, major gas deal inked in May.

In that deal, Moscow and Beijing agreed on the terms to deliver 38 billion cubic meters of natural gas a year from Russia’s as-yet-undeveloped gas fields in eastern Siberia to the heavily populated eastern corridor of China.  The new deal, in contrast, is not binding and lacks agreement on key elements, most notably price.  The decade-long negotiations that preceded the May deal produced a handful of similar memorandums over the years, which became somewhat routine and merely suggestive of a continued intent to pursue the contours of a deal.

It was not until Gazprom and the Chinese National Petroleum Corporation successfully tackled the issue of price that the May deal, worth $400 billion at the time, was finalized.

With the issue of price outstanding, this week’s agreement seems more like a political statement.

Future negotiations, however, may prove even more difficult, given the recent dip in oil prices, which will drive down the cost of natural gas, since many gas contracts in Asia are indexed to the price of oil.  Moreover, in the May deal, Russia, under pressure after its intervention in Crimea, is believed to have accepted a price akin to what it gets for its gas in Europe — and significantly less than it was hoping for, given the higher cost of gas in Asia.

China will undoubtedly demand an even lower price for Russian gas coming in this second pipeline, which will enter China in its northwest, very far from population centers and in the heart of Xinjiang, China’s most restive region.

What if, in the near future, China and Russia agreed on price and transformed this memorandum into a binding agreement?  How significant would the new pipeline be?  Several have quoted Gordon Kwan of Nomura Holdings in Hong Kong as claiming that the two deals together could meet nearly 17 percent of China’s natural gas needs by 2020.  No question, this is a significant amount.  But it should be put in the context of China’s overall gas demand and energy mix, which is very different than those of the U.S. and other developed economies.

In the U.S., gas and coal are used in similar proportions. In the OECD as a whole, gas will overtake coal as an energy source by 2035. Yet in China today, coal still accounts for over 60 percent of energy while gas makes up around 6 percent.  Changes are expected, but coal will still meet more than half of all of China’s energy needs in the decades ahead.

Natural gas plays a strategic and important role for China in its quest to address environmental challenges while pursuing economic growth.  But even if the government is successful in expanding gas as planned in the years ahead, it will only comprise 10 percent or so of China’s energy mix by the end of the decade.  The two Russian gas deals together, if realized, would meet just 1.7 percent of China’s overall energy demand; the second one on its own would amount to less than 1 percent of China’s overall energy consumption. (However, when taken with other forms of energy supplied by Russia — including coal and oil — Chinese dependency increases significantly.)

There has been speculation that these deals with China have the potential to overtake Russia’s gas trade with Europe. Gazprom chairman Alexei Miller said, “the overall volumes of gas exported to China might exceed supplies to Europe in the medium term.”  Gazprom better hope he is not correct.  Again, let’s look at the numbers.

If both Russian pipelines exported the full total of the planned 68 billion cubic meters of gas to China by 2020, that amount would still be less than half the 160 billion cubic meters Russia exported to Europe in 2013.  There are only two conceivable scenarios under which this volume of gas to China could exceed the volumes flowing to Europe. The first involves Europe successfully substituting for nearly 60 percent of the Russian gas it is currently consuming, through its own shale gas production, increased efficiency, lower demand and alternative sources such as imports of U.S. liquefied natural gas.  While these efforts will indeed chip away at European dependence on Russia, even the most sanguine observers do not anticipate such progress by 2020.

Take, for instance, the most optimistic projections of Europe’s own shale gas production.  According to the International Energy Agency’s “Golden Rules” study of 2012, if all European countries with unconventional gas were to overcome political and other obstaclesand develop their resources according to a certain set of best practices, Europe could produce 10 billion cubic meters a year of mostly shale gas by 2020, and almost 80 billion cubic meters a year by 2035.

Put aside that this is almost inconceivable, given the wide array of restrictions currently existing on shale in Europe. Even production at the upper limit would still mean more Russian gas flowing into Europe than into China, particularly if one takes into account that indigenous shale production in Europe will likely first have to substitute for Europe’s declining production of conventional gas before it displaces cheaper Russian imports.

Then there is the second scenario in which China becomes more important to Russia than Europe: Moscow sells less gas to Europe by its own volition  — a more ominous interpretation of Miller’s comment — or as a result of a political confrontation with the West.  Perhaps the most interesting aspect of this week’s “deal” is that it would involve Russia exporting gas from western Siberia to China.  These fields are, for the most part, already developed and currently used to supply Europe; the “Altai” route, which is the subject of Sunday’s memorandum, would technically allow Russia to shift resources from European markets to meet Chinese needs.

Such a move would not make economic sense for Russia, given that the price Russia can get for the same gas as it heads east will almost certainly be less than when it heads west.  However, given Putin’s evident willingness to bear economic costs for geo-strategic gains, we should not rule it out.

In the end, Sunday’s deal does little more than underscore the options that both Russia and China would like to have in the future.  China continues to seek not only an increase in the amount of natural gas it can import, but also a diversity of routes through which it can arrive.  Russia looks to insulate itself from the possibility that Europe will curb its gas demands, and may also seek to increase its political leverage by creating alternatives for its western Siberian gas.

Yet, despite these sensible impetuses, we are still some distance from seeing anything resembling a real deal materialize.  For now, this week’s announcement looks like little more than an effort to placate Putin and to distract him from the real news of the APEC summit: that the U.S. and China are willing to work together to address climate change.