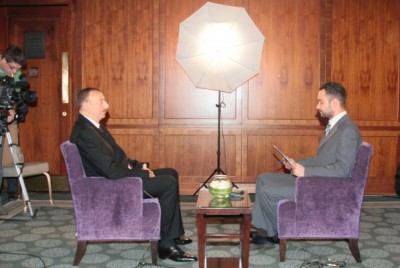 In his interview to the Hungarian national TV on November 11, 2014 Azerbaijani President Ilham Aliyev said that within 100 years Azerbaijan could become a reliable gas supplier to Europe.

“We have huge energy resources. Our confirmed minimum gas resources total 2.5 trillion cub.m. and they will be even higher, because we have been conducting exploration works. Even this number is enough to become a reliable gas supplier for the European consumers within at least 100 years,” Ilham Aliyev said.

He said Azerbaijan has taken efforts to deliver these resources to the European market. Some European Union members receive 40% of oil from Azerbaijan.

Ilham Aliyev said that Azerbaijan has been implementing the Southern Gas Corridor project, which will fully change the energy map of Europe. “Less than two months ago in September we launched the Southern Gas Corridor project. The works have already started. The project will let Azerbaijan to establish ties with many European countries and create a new modern distribution system,” added President.

For the first time Azerbaijani President has described possibilities of the gas export system, which is under construction now. “We will create such a distribution system, which could be used to transport about 50 billion cub.m. of gas,” said Ilham Aliyev.

“As you know, the projects, which will connect the gas pipelines between the European countries, are under consideration. I think we have to work together and make sure that the interests of the countries-manufacturers, such as Azerbaijan, transit countries and countries-consumers are balanced. Without the energy safety it is hard to safeguard physical safety, because all these issues are interconnected,” explained Azerbaijani President.