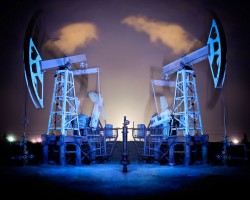 Kazakhstan’s economy grew 4 percent in January-September, slowing from a year ago as it was hit by the economic slowdown in major export market Russiaand by a drop in oil and metals production, preliminary data showed on Tuesday.

“There is a certain slowdown in the growth tempo,” Alikhan Smailov, head of the National Economy Ministry’s statistics committee, told a news conference.

“To some extent it is linked to a downward trend in industrial output caused by crisis phenomena in the Russian Federation due to the sanctions, which in turn led to falling demand for Kazakhstan’s exports.”

Russia, a close ally which has agreed with Kazakhstan and Belarus to launch the Eurasian Economic Union on Jan. 1, has seen its economy slow as it has faced several rounds of U.S. and EU economic sanctions over its involvement in the Ukraine crisis.

The World bank said this month that it expects Kazakhstan’s economy to grow by 4.3 percent this year, down from 6 percent in 2013.

Kazakhstan has officially forecast 6 percent growth this year, but Economy Minister Yerbolat Dosayev said last week that the government would slash its growth forecasts for this year and for 2015-17 due to the slowdown in Russia, which some economists say is set for a period of stagnation, and due to the drop in oil prices.

“You know, we have a decline in our non-ferrous industry, and our oil output is also lagging behind our original production target,” Smailov said. “But the oil ministry plans to catch up with the oil production target by the year-end,” he said.

Kazakhstan is the largest oil producer in the former Soviet Union after Russia.

It plans to keep oil output at 81.8 million tonnes this year and next, roughly unchanged from the level in 2013.

But production was stopped just a few weeks later when gas leaks were detected in its pipeline network. The multinational consortium developing the field may now have to spend up to $3.6 billion to replace the pipes, and output at Kashagan may not resume before 2017.

Kazakhstan’s refined copper output fell to 184,700 tonnes in January-August, from 252,600 in the same period of last year.