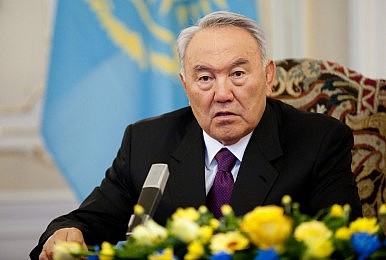 A lack of culpability between company and state fuels workers’ rights suppression.
Tony Blair, recently awarded “philanthropist of the year,” has also been in the news for providing services of a different kind to Kazakhstan’s President Nursultan Nazarbayev.
A letter has surfaced in which the former U.K. prime minster offered the president advice on how to tackle the “Zhanaozen issue,” concerning the death of striking oil workers on Kazakhstan’s Independence Day in 2011. This event was another chapter in the history of resource industry development and its bitter relationship with social and political development in the post-Soviet state. Blair’s involvement is a typical example of a continued refusal to acknowledge that there are severe faults in the labor systemTengizChevroil represents.
In 1993, shortly after the fall of the Soviet Union, Kazakhstan signed a deal with Chevron over the right to develop the sizable Tengiz oil field. There had never been a serious exploitation of Kazakh oil resources under the Soviet Union, and the newly independent government was eager to reap the potential economic benefits, eschewing the resource nationalism which characterized Russia’s approach. TengizChevroil was born and came to be seen as a model of East-West partnership in the new republics.
Despite the tremendous wealth of the oil field, the enterprise has been fundamentally at odds with the well-being of workers and local communities. There is a certain duality to TengizChevroil’s handling of labor disputes. While it has applied pressure to dissolve the oil workers union, leaving the 24,000 employees effectively without an organization to represent their interests, it has also distanced itself from responsibility regarding corruption and labor disputes, claiming that such matters were the concern of subcontractors. This is problematic when one considers that Kazakhstan, as a state, is essentially a creation of Soviet imperialism and since independence has pursued a strategy of suppression and economic growth to maintain national unity.
This can all be framed within the context of the “industrial colony,” a phrase used to describe enclaves that develop within resource-rich but potentially unstable countries. The nature of these colonies is one that cannot contribute to local development and will inevitably cause social tension, and is more complex than the conventional understanding of rent-seeking within petrostates:
“These enclaves, intended to divide the foreign oil companies from potentially unstable situations, actually promote the very social tensions and insurgencies against which they were initially erected.”
The history of oil workers in Kazakhstan seeking representation and improved conditions has been dismal. Since the early 2000s, following every round of public discontent the state has increased the force and efficiency with which it has struck back. Chevron, despite its supposed commitment to contributing to local development, ultimately did nothing. The industrial colony structure dis-incentivizes company action because responsibility for atrocities is diffused between the state and the network of subcontractors. There is little the workers can do against a system in which there is so little clarity over who is responsible for them and their interests. However, this does not stop them from trying.
On December 16, 2011, the simmering agitation boiled over once more. Possibly inspired by the Occupy Movement, a tent city was established in Zhanaozen and was subsequently brutally dispersed by police using live ammunition. A media blackout was enforced, and although the official death-toll stands at 16, sparse on-the-ground coverage places it closer to 70, with over 500 wounded. On top of this were mass arrests, brutal interrogations, and the torture of demonstrators. There is an interesting contrast, as Peter Salmon describes, between the congratulations the president of Kazakhstan was receiving from world leaders on his country’s independence day saluting his undemocratic 20-year reign, and the petitions from worker’s groups around the world which were largely ignored. Likewise, a group representing the U.K.’s largest unions officially condemned Tony Blair while he was consulting Nazarbayev, telling the president to keep a brave face and soldier on for the sake of progress and development.
There is no easy solution to the woes of Kazakhstan’s oil workers, just like there is no simple answer to the issue of corporate responsibility in general. However, as the Kazakhstan case shows, when the state is brutal and non-transparent, when worker organization is non-existent, the company abrogates responsibility and powerful figures in government and business respond with silence, the situation will only get worse.

Kirill Kovalenko is a Masters of International Relations graduate from the University of Melbourne interning with the Royal United Services Institute of Victoria.