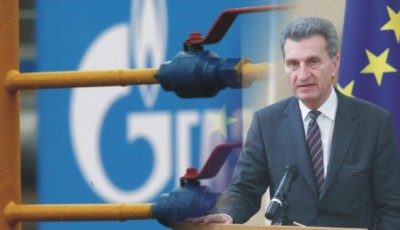 South Stream is acceptable for the European Union, but it is not a priority project, said Gunter Oettinger, European Energy Commissar, in Brussels yesterday.

EU calls the Southern Gas Corridor a project for alternative gas supply of Europe a priority one, he added.

Russian Energy Minister Alexander Novak said earlier that Russia hopes for resumption of work on of the South Stream gas pipeline after formation of a new composition of the European Commission and appointment of  a new European Energy Commissar. ”The South Stream project has not been suspended. The intergovernmental; agreements, which have been signed, are still effective and they cannot be terminated unilaterally,” Novak said. Minister added that the project will be implemented.

Oettinger added that European Commission expects that during the meeting in Brussels in October 21 Russia, Ukraine and European Union will find an agreement on the Russian gas deliveries to Europe in autumn and winter.

“I think we will conclude the agreement on the gas deliveries till spring 2015,” said European Commission. He said EU must not be a “hostage” of the gas dispute between Russia and Ukraine and he hopes that it will be based on  a “fair price.”

European Commissar also said that he will visit Moscow and Kiev on Sunday and Monday to prepare for the forthcoming tripartite meeting between the Ministers.