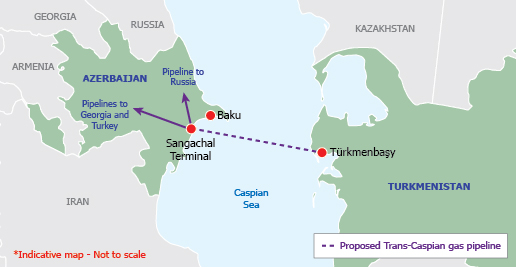 The European Union plans to hold another trilateral round of talks with Azerbaijan and Turkmenistan regarding the creation of the Trans-Caspian gas pipeline, Azerbaijani Energy Minister Natig Aliyev told reports Oct. 20.

“EU Energy Commissioner Günther Oettinger proposed to hold another round of negotiations with Azerbaijan and Turkmenistan in Brussels,” he said. “But, unfortunately, the Turkmen side failed to come for some reason. Oettinger assured me that this meeting will take place.”

The minister has not been informed of a new date for talks.

The negotiations among the EU, Azerbaijan and Turkmenistan on the Trans-Caspian gas pipeline began in September 2011.

In July 2013, following high-level talks in Ashgabat, a framework agreement was signed between Turkmenistan and Turkey. The agreement envisaged cooperation in the delivery of Turkmen gas to Turkey and further to Europe.

The project for laying a 300-kilometer gas pipeline along the bottom of the Caspian Sea up to the shores of Azerbaijan is considered to be optimal for the delivery of Turkmen energy resources to the European market. The Turkmen hydrocarbons can subsequently go to Turkey, which shares a border with the European countries.

Turkmenistan believes that its and Azerbaijan’s consent is enough to construct a pipeline along the bottom of the Caspian Sea, the legal status of which still needs to be determined.

The project covers the territories of Azerbaijan and Turkmenistan. Azerbaijan said it stands ready to provide its territory, transit opportunities and infrastructure to realize the project.