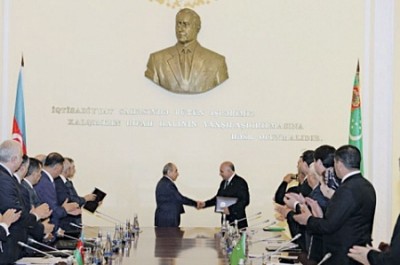 At the same time Azerbaijan and Turkmenistan avoid discussing problems

The 4th session of the Azerbaijani-Turkmenistan economic cooperation commission took place in Baku last week. The new character of relationships between Azerbaijan and Turkmenistan has been confirmed at the session. The sides will develop economic cooperation in all the fields, avoiding at the current stage discussion of the only problem – ownership of two hydrocarbon fields in the Caspian Sea.
The Azerbaijani-Turkmenistan intergovernmental commission on economic cooperation has confirmed unity of opinions of the two countries’ leaders, including the issue of the trans-Caspian pipeline. At the 4th session, which took place in Baku after the Caspian summit in Astrakhan, the participants have heard the report about the done work and outlined the ways of further strengthening of ties between the two countries.
A well informed source told Nezavisimaya Gazeta (Independent Newspaper) that at the session Turkmenistan and Azerbaijan have avoided the problem – determination of borderline between the countries in the Caspian Sea, which means that the issue of ownership of two offshore oil fields remains unsolved. Such an approach allows the sides focusing on implementation of joint projects, instead of finding the ways to solve this complex problem. 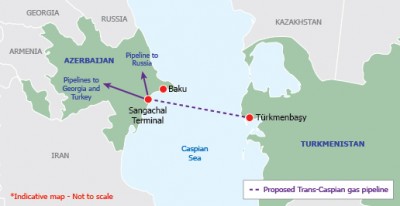 While commenting on the results of the session, Toylu Komekov, Turkmenistan Ambassador to Azerbaijan, mentioned great perspectives of the import-export relationships between the two countries. He said that the Ministries will be instructed to work to increase volume of cargo transportation between the sea ports in Baku and Turkmenbashi.
Komekov added that the countries have established good relationships in the humanitarian field and education. 266 Turkmen citizens currently study in Azerbaijan. In the future their number is expected to increase significantly. At the session a special attention has been paid to the joint scientific research in the oil and gas industry and involvement of economic subjects of the both countries into industrial and energy projects. Although official sources do not provide concrete data, the experts do not rule out that the sides have discussed the trans-Caspian pipeline.
Resumption of Turkmen gas export to the West is getting urgent against the background of events in Ukraine, which have intensified the issue of gas supply of Europe. In this situation this is possible only with the trans-Caspian gas pipeline, which is considered by Europe as an integral part of the Southern Gas Corridor bypassing Russia.
Nezavisimaya Gazeta already wrote that the Azerbaijani officials have repeatedly said that they are ready to provide their infrastructure for gas transit from Turkmenistan and Middle Asian countries. As far as Turkmenistan is concerned, it sells gas on its borders and it is not concerned about future fate of gas. However, Turkmenistan has reserved 10 billion cub.m. of gas for transportation to Europe and Turkmenistan President Gurbangulu Berdymohammadov firmly believes that construction of the pipeline in the Caspian Sea is possible with consent of only those countries, through which bottom the pipeline will be laid with observation of the highest international environmental standards. This means that Azerbaijan and Turkmenistan share the opinion that construction of the pipelines in the national sectors of Turkmenistan and Azerbaijan is the internal affair of these countries.
Now it is up to the West. Western experts believe that if Europe displays a proper political will and is able to overcome resistance of Russia and Iran and attract required investments for the gas pipeline construction, then the project has a chance to be implemented. First of all the western countries must be interested in safeguarding their energy safety. As far as Turkmenistan and Azerbaijan are concerned, they already export their gas and at present they do not need to create additional problems for themselves, despite attractiveness of the trans-Caspian project.