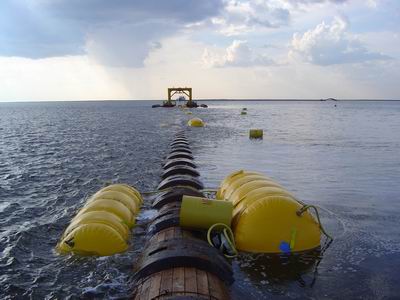 The Caspian summit held on Sept. 29 in Astrakhan may have a positive effect on the Trans-Caspian gas pipeline project, which, despite all its attractiveness and desire of involved parties to implement it, hasn’t moved forward thus far.
The EU is the party that is deeply interested in the project being launched, more than the anyone else. Because if the project is implemented, it will provide the EU with essential additional alternative supply source in the face of Turkmenistan.
Gas resources of Turkmenistan can be connected to Europe through the Caspian Sea by building a 300km-long pipeline across the sea, to the shores of Azerbaijan. From there, fuel can be transported to Turkey which has mutual borders with European countries.
The EU, Azerbaijan and Turkmenistan started talks on the Trans-Caspian Gas Pipeline in September 2011. However Russia and Iran have always spoke against the Trans-Caspian pipeline due to ecological issues during the pipeline’s construction.
Kazakh political scientist, Doctor of Political Sciences Dosym Satpayev believes that ecological factor is a geopolitics tool in the hands of Iran and Russia.
“Everybody understands that Russia and Iran focus on the ecological aspect of Caspian dialogue, because this fact will prevent the construction of the pipeline,” Satpayev told Trend.
The position of Turkmenistan regarding the construction of a pipeline along the bottom of the Caspian Sea is clear and quite fair.
“The construction of such pipelines is a sovereign right of the states through the territory of which the pipelines run, and therefore their construction be can carried out only with those states’ consent,” President of Turkmenistan Gurbanguly Berdimuhamedov said following the Caspian Summit.
At the same time Azerbaijan has repeatedly stated about the readiness to provide its territory, transit opportunities and infrastructure to realize the project.
The unresolved status of the Caspian Sea was always considered as the main factor hindering the implementation of the Trans-Caspian gas pipeline project.
Thus, encouraging statements of all sides about a breakthrough that has been achieved at the summit, in particular agreeing the key principles on the Caspian Sea status, gives hope for some progress in Trans-Caspian pipeline issue.