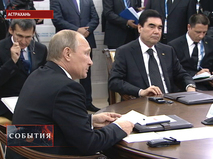 Turkmenistan proposes to consider the preparation of a draft agreement on trade and economic cooperation among the Caspian littoral countries, President of Turkmenistan Gurbanguly Berdimuhamedov said at a press conference following the fourth Caspian Summit in Astrakhan Sept. 29, Russia 24 TV channel reports.
“Turkmenistan consistently stands for the expansion and intensification of partnership on key aspects of the Caspian problems,” he said.
“First, this is to maintain lasting peace and security, to prevent and neutralize the risk of military confrontation,” he said. “We stand for close coordination of our countries’ efforts to combat illegal activity in the Caspian Sea, namely, smuggling, poaching, drug trafficking, extremism and terrorism.”
“Among the main areas of cooperation, Turkmenistan sees the intensification of trade and economic ties,” he said.
Along with the proposal to prepare a draft agreement on trade and economic cooperation among the Caspian littoral countries, President Berdimuhamedov said that Turkmenistan also has proposed to create a permanent Caspian Economic Forum by holding meetings alternately in the coastal cities of the Caspian countries.
“During the talks, Turkmenistan paid special attention to the need for enhanced cooperation among the Caspian littoral countries in the transport sector, maximally using the potential of the Caspian Sea,” President Berdimuhamedov said.
“Here the matter rests in creating a fundamentally new architecture of relations among the Caspian states in the transport sector, as our countries’ territories serve as natural geographic space linking Asia and Europe, securing effective functioning of transport, transit and trade corridors in the east-west and north-south directions,” Turkmen president said.
Berdimuhamedov added that, in this context, Turkmenistan considers it rational to draft an agreement on cooperation in transportation in the Caspian Sea.
“We also believe it is important to create a regional transport logistics center as one of the elements of such cooperation,” he added.
The president said Turkmenistan is convinced that the Caspian Sea region has large opportunities for partnership in the energy sector, adding that this partnership can be carried out both on bilateral and multilateral basis.
He added that in this case, each state determines the form and extent of its involvement.
“The main principle here should be mutual respect, taking into account the partners’ interests, and adherence to universally recognized norms of international law,” Turkmenistan’s president said. “And politicization of any energy projects in the Caspian Sea is counterproductive.”
He said this also applies to the prospects of construction of pipelines.
“Turkmenistan’s stance on this issue is very clear, and from the point of view of international law, it is entirely justified,” Berdimuhamedov added.
He said the construction of such pipelines is a sovereign right of the states through the territory of which the pipelines run, and therefore their construction be can carried out only with those states’ consent.
“It is a common practice used in similar projects in various parts of the world, of course, in case of compliance with the highest international environmental standards during the construction,” Berdimuhamedov noted.