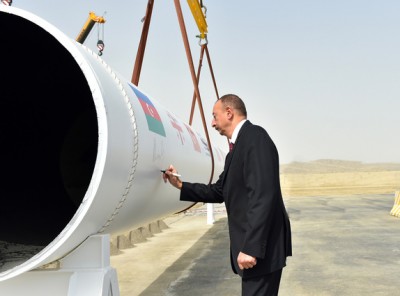 The Southern Gas Corridor will be of great benefit to Azerbaijan, as the country will get additional income from delivering its own gas resources to world market, Azerbaijani President Ilham Aliyev said.
The president spoke to reporters following the groundbreaking ceremony for the Southern Gas Corridor at the Sangachal Terminal.
Aliyev said this project creates additional opportunities for the transit countries.
“Alternative new gas sources are being provided for the buyer countries, the gas consumers. At the moment the energy security and diversification of energy resources are highly valued in the world and especially in Europe, and Azerbaijan plays a role in this,” the president said.
Ilham Aliyev called the Southern Gas Corridor a “project of the century”, adding that this project will bring benefits to all, at least for 100 years.
He added the energy “silk way” and the rail “silk way” i.e. the Baku-Tbilisi-Kars are being built.
“I can say that these realities have been a result of our energy policy, which began 20 years ago at Azerbaijan’s initiative,” President Aliyev said. “Today – September 20 is a historic day for us, for the reason that exactly 20 years ago Azerbaijan signed the Contract of the Century with foreign oil companies.”
He said the construction of the Baku-Tbilisi-Ceyhan and the Baku-Tbilisi-Erzurum pipelines secured the modern realities.
“If these steps were not taken at that time, there would not have been today’s ceremony. Therefore, today we are entering a new stage in energy policy. Here, Azerbaijan, our neighbors, the European countries will work as one team,” Azerbaijani president said.