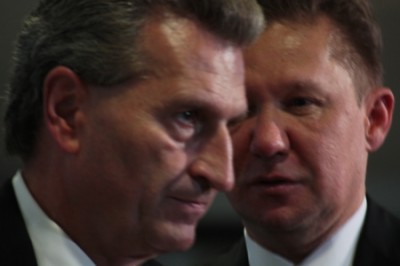 Russia, Ukraine and the European Union moved closer to sealing the deal, with European Commissioner Günther Oettinger announcing on Friday that there is a high probability of signing a binding interim agreement by the end of next week.
“We have prepared a robust draft for the winter. I am confident it will be approved by authorities in Moscow and Kiev. There is a high probability we will sign a deal by the end of next week,” Oettinger said during a press conference in Berlin.
In the presence of Gazprom’s Alexey Miller, Oettinger said that Ukraine has committed to pay $3.1 billion by the end of the year, with Europe acting as a warrantor.
“Ukraine has committed to pay the outstanding invoice and transfer $2 billion by the end of October,” Oettinger said at the beginning of its speech.
Russia’s Energy Minister Alexander Novak confirmed Oettinger’s statement, explaining that Kiev will pay the $2 billion using funds provided by Western countries and institutions.
“Ukrainian partners can pay $3.1 billion from the funds that received from the IMF,” Novak said, adding that the remaining $1.1 billion will be paid “in instalments” by the end of the year.
The parts specified that the agreement is conditional to prepayments from Kiev, as requested by Russia.
In this way, Ukraine will receive gas from November, following the $2 billion transfer and prepayments for new deliveries. Ukraine will have access to 5 bcm supplies, priced at $385 per 1,000 cubic meters.
The parts said that the major bone of contention was the price set for Ukraine’s Naftogaz. Moscow almost doubled gas prices for Ukraine to $485 per 1,000 cubic metres starting April 1st, while Ukrainian authorities kept asking for prices in line with European hubs. In this sense, the positions explained by Oettinger and Novak pave the way for an interim solution.

In this backdrop, possible threats for a final deal come from different views on reverse flows from European countries to Ukraine.
“We only briefly touched upon the subject. Those reverse flows are not part of contracts with Gazprom,” Novak said.
Earlier today, Gazprom’s Miller dismissed reverse flows, saying that it is against the contracts signed by Gazprom and European companies. During the conference, Oettinger contradicted Miller’s previous statement, saying that reverse flow remains a legally viable possibility.
“Reverse flow is legally possible,” Oettinger said, adding that Russia will receive additional payments in case Russia prevailed in Stockholm.
According to the parts, the remaining contrasts should be settled by Tuesday. On Friday, the parts are expected to sign the so-called Winter Package.
The provisional agreement will come to a conclusion with the arbitration by the Stockholm Tribunal, after which the gas price will be settled and eventual additional payments done.

On Thursday, Naftogaz reported on its website that natural gas supplies to Ukraine have further tightened. Gas flows from Hungary to Ukraine were halted on Thursday, with Ukrainian TSOUkrtransgaz receiving notice from the Hungarian TSO FGSZ notifying of a halt of supply at 19:00 for technical reasons ‘until further notice’ and for an ‘indefinite period.’
Similarly, Polskie Górnictwo Naftowe i Gazownictwo (PGNiG) lamented a reduction in Russian natural gas supplies with respect to the ordered volumes. Earlier this month, it repeatedly asked Gazprom for clarification.
The company led by Alexey Miller said that it is supplying gas to Europe in line with its contractual obligations. Consistently, Slovakia’s Eustream said on Friday that gas flow from Ukraine is in normal mode.

GAS PRICE AND GEOPOLITICS: THE 8TH ROUND OF NEGOTIATIONS

The negotiation that took place on Friday is the last of a long series of talks.
Earlier this week, after a trilateral negotiation in Brussels, Oettinger said that the European Union proposed an interim solution to avoid gas disruption, which resembles the one presented during the conference in Berlin on Friday.
Moscow, Kiev and Brussels started talks on Russian gas supplies in June, with meeting in Berlin, Brussels, Moscow and Kiev. In early June, Russian President Vladimir Putin said that Gazprom and Naftogaz were “close to reaching final agreements” on price.
On September 5, Ukraine’s government and pro-Russian militants agreed on a nine-point peace plan for the conflict in Eastern Ukraine. The ceasefire seems to hold and Ukraine President Petro Poroshenko said on Thursday that, for the first days in months, Ukraine did not report any deceased or wounded.
“The ceasefire has finally started working,” Poroshenko commented at a conference in Kiev.

On Thursday, the European Commissioner also noted that EU nations could be soon called to increase their minimum natural gas storage to the equivalent of 60-day demand. The present rules, introduce by the Security of Gas Supplies regulation, require European countries to store an amount of gas equivalent to 30 days of ‘exceptionally high gas demand, occurring with a statistical probability of once in 20 years.’
‘Storage activity is characterised by a medium-term horizon in development (2-6 years),’ Sergio Ascari, Gas Adviser at Florence School of Regulation, wrote in March 2012.
As September 26, EU 28 stored 75,763 mcm of gas, with Germany and Italy accounting for 26.9% and 20.8% of total stored gas respectively. The current levels are higher than the ones registered in 2011, 2012 and 2013. According to GSE, Ukraine’s current inventory level of gas amounts to 16,391 mcm.

Ukraine’s heavy industry is mainly located in its eastern provinces.
‘Donetsk and Luhansk regions – the worst affected areas – account for 75% of all coal mining in Ukraine. As of early September, regional disruptions halted coal production leaving up to 30% of mining activities unavailable and significantly impacting coal production,’ Wood Mackenzie wrote on Tuesday, in its latest report on Ukraine’s coal, power, steel and iron ore industries.
According to the consultancy group, the conflict took its toll on Kiev’s strategic energy assets, with significant consequences on its energy security.
Ukraine already clinched a deal with a South African supplier for 1Mt of import coal for the looming winter, but its future is now in European hands. Next week will tell if Europe is strong enough to solve the remaining divergencies. Oettinger would then save face and Brussels – to read Berlin – would finally give some proof of diplomatic skills.