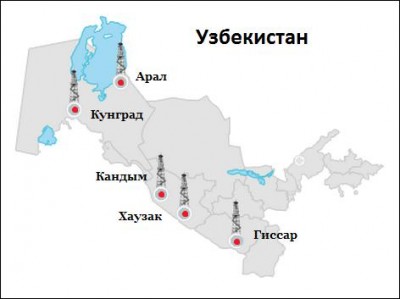 Russian national oil company LUKOIL invested $301 million in January-June 2014 in hydrocarbon exploration and production in Uzbekistan, which is 16.2 percent more than in the same period of 2013, the company said.

LUKOIL is currently working in Uzbekistan on realization of three projects under the terms of a production sharing agreement (PSA) – these are the Kandym-Khauzak-Shady project, the development of the Southwestern Hissar field, and the geological exploration of the Aral Sea’s Uzbek part as part of an international consortium.

The total cost of the first two projects is $4.34 billion, including Kandym-Khauzak-Shady at $3,146 billion, and the Southwestern Hissar at $1,196 billion.

In addition to mining of the Southwestern Hissar and Kandym-Khauzak-Shady-Kungrad, LUKOIL is also conducting geological exploration at the Western Aral structure, jointly with the Uzbekneftegaz, CNPC and Korea National Oil Corporation.

LUKOIL said it plans to produce in Uzbekistan at least 18 billion cubic meters of gas annually by 2020.

LUKOIL is one of the largest foreign investors in Uzbekistan. Since 2004, the company has invested over $3 billion in the Uzbek economy.

The total funds that LUKOIL plans to invest in the implementation of the Uzbek projects, will amount to more than $5 billion.

The projects in Uzbekistan are operated by the LUKOIL Uzbekistan Operating Company – a subsidiary of LUKOIL Overseas Holding Ltd., which represents LUKOIL’s interests in the international oil and gas production.