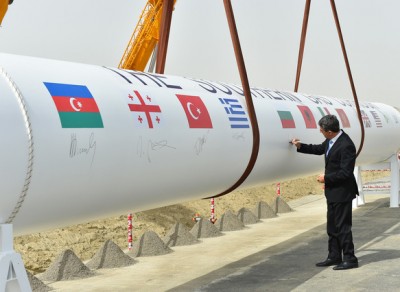 Finding alternative resources as well as routes of gas supplies and energy diversification has become a matter of national security and key priority for European countries, Bulgarian President Rosen Plevneliev said, Sept.20, during a ceremony marking the 20th anniversary of the Contract of the Century and groundbreaking of the Southern Gas Corridor.
Plevneliev expressed gratitude to Azerbaijani President Ilham Aliyev and the people of Azerbaijan for the launch of the Southern Gas Corridor to Europe.
He said the gas crisis of 2009 reminded Europe of its biggest vulnerability – its energy dependence and Bulgaria was one of the most affected countries during this crisis.
”The Bulgarian economy was loosing hundreds of millions of euros a month,” the president said.
Plevneliev said that the crisis in Ukraine highlighted the issue of Europe’s energy dependence and put it in the forefront in the EU’s political agenda, and is the issue of the future competitiveness and fair trade.
“The launch of the Southern Gas Corridor will put an end to the Europe’s one pipe dependence and bring security of supply to the whole region of the South-Eastern Europe and far beyond,” Bulgaria’s president said.
Plevneliev said that diversification and competition will contribute to energy market liberalization and ensure fair prices for everyone.
“The Turkey–Bulgaria gas interconnector must be considered as an integral part of the Southern Gas corridor, enabling significant gas source to Bulgaria and neighboring countries: Romania, Serbia and many others. It will turn Bulgaria into a gas hub. Bulgaria is fully committed to speeding up construction of the gas interconnector with Turkey, Greece, Romania, Serbia.”
“We should not forget Nabucco and integrate parts of Nabucco in the Southern Gas Corridor. Today we make a big and historic step foreword into securing Europe’s energy security,” the president said.
Plevneliev also said that Azerbaijan has always been a valued and trusted partner.