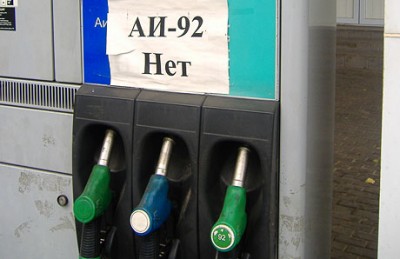 There is a shortage of fuel at the Kazakhstan retail fuel market through the fault of the operator delivering fuel from Kazakhstan to Russia, Bolat Auyetayev, chairman of the Kazakhstan Fuel Association, said at a press conference at the end of last week.

“Some petrol filling stations are forced to limit fuel sale per person or to fully switch to the coupon service system. At present the wholesale price is higher, than the retail one. In some cases the petrol stations work with losses,” he said.

He said in July AI-92 petrol deliveries to the local market declined by 2.6 times against the same period in 2013 and January 2014. “One market participant was offered fuel at 110 tenge (1 liter of diesel fuel – KazTAG). The price with the transportation costs will be 116 tenge , but fuel could be sold at the petrol stations at 115 tenge,” Auletayev said.

The Association chairman also said that at present wholesale price of AI-92 is 115 tenge per liter. In June KazMunaiGas Onimderi, the fuel delivery operator, delivered only 20,000 tons of light oil products from Russia to Kazakhstan against the scheduled 118,000 tons.