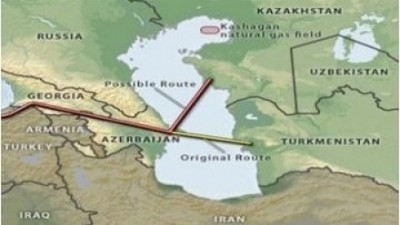 For both energy producers and consumers, diversity of sources and markets is increasingly important as insurance against the vagaries of geopolitical tectonic plate shifts. An increasingly popular phrase uttered by European Union and U.S. politicians is “energy security,” with the Ukrainian crisis focusing Eurocrats’ attention on their dependence on Russian natural gas imports and their consequent vulnerability to worsening relations with Russia.

While no immediate fix is at hand, the EU is casting about for new partners to lessen their dependence on Moscow.

Europe’s anxieties have been duly noted by Turkmenistan, which is now eyeing the possibility of lucrative gas exports to Europe via Azerbaijan and Turkey. On June 3 Turkish Abdullah Gul met with Turkmen President Gurbangeldy Berdymukhammedov in Ankara and subsequently told reporters that Turkey will deliver Turkmen gas to European markets. Such deliveries would mean that Turkmenistan would be exporting in four directions, already sending gas eastwards to China, northwards to Russia and southwards to Iran and, in the future, westwards to Azerbaijan via a subsea Caspian pipeline for further transmission to Turkey, where it will then enter the Trans-Anatolian Natural Gas Pipeline (TANAP), currently under construction and scheduled to be operational by 2018.

TANAP will provide Turkey with both transit fees as well as more “energy security,” as it currently imports 60 percent of its natural gas from Russia.TANAP will initially transmit 16 billion cubic meters (bcm) of Azeri gas from its offshore Caspian Shah Deniz field. With the addition of 15 bcm Turkmen gas, TANAP is projected to by 2026 to have an annual throughput of 31 bcm.

Turkey’s natural gas and energy minister Taner Yildiz is well aware of Turkey’s unique role in helping Europe diversify its energy resources, commenting, “Turkey has an obligation to use its geographical advantages the right way. The countries located on the east side of Turkey possess 65 percent of the world’s entire energy resources while the Western consumers constitute 65 percent of the world’s total consumption.” Brussels, as noted earlier, is desperate to lessen its dependency on Gazprom imports, which cost between $325-$475 per thousand cubic meters (tcm).

Acquiring a precise overview of Turkmen natural gas assets is difficult, as the majority of Turkmenistan’s economic statistics remain state secrets. In 2012 Oil & Gas Journal reported that Turkmenistan had proven natural gas reserves of approximately 265 trillion cubic feet (tcf) in 2012, a massive increase from 2009’s estimates of 94 tcf. Turkmenistan’s natural gas deposits are the world’s sixth largest, exceeded only by the U.S., Saudi Arabia, Qatar, Iran and Russia. In 2012 Turkmenistan produced an estimated 64.4 billion cubic meters of natural gas. As domestic consumption was only 23.3 bcm, a whopping 41.1 bcm was left for export, making Turkmenistan the world’s 11th largest exporter of natural gas, exceeded only by Russia, Qatar, Norway, Canada and Algeria, among others. In 2013 Turkmenistan’s natural gas production increased to 70 bcm/year and it’s estimated that the production will increase to 75 bcm/year in 2014. Last year Turkmenistan exported 25 bcm to China, which began importing Turkmen gas only four years ago.

Before Brussels can wean itself off Russian gas imports, it needs to focus pragmatically on issues involved with Turkmen gas imports. From 1998-2005, Turkmenistan suffered from a lack of adequate export routes beyond Soviet-era Truboprovodnaiia sistema Sredniaia Aziia-Tsentr (the Central Asia-Center, or SATS) pipelines for natural gas and from obligations on extensive short-term external debt. Even so, total exports rose by an average of roughly 15 percent per year from 2003-08, largely because of higher international oil and gas prices.

Additional pipelines to China that began operation in early 2010 and increased pipeline capacity to Iran, have expanded Turkmenistan’s export routes for its gas.

While Turkmenistan has some of the largest natural gas reserves in the world, it is geographically far from end-use markets and lacks sufficient pipeline infrastructure to export more hydrocarbons. Also, other hydrocarbon-rich Central Asian and Caspian states with more favorable investment climates and greater access to markets pose competition. Turkmenistan is eager to diversify export routes for its oil and gas resources outside of the Soviet-era pipelines going to Russia and the more recent Central Asia-China Lines A, B and C, but a European option must obtain capital, technical assistance, and political support.

In case anyone missed the point, on June 14 European Commission President Jose Manuel Barroso arrived in Baku for talks with Azerbaijan’s President Ilham Aliyev covering, among other things, Azerbaijan possibility signing an EU Association Agreement, as well as ways to expand the infrastructure for natural gas deliveries to the EU through a Southern Gas Corridor – including negotiations with Turkmenistan on a proposed trans-Caspian pipeline to Azerbaijan.

The one potential sticking point for the proposed undersea Caspian-Turkmen-Azeri natural gas pipeline is that the Caspian’s seabed and offshore waters have yet to be equitably divided between the shoreline states. At issue are the diametrically opposed positions of Iran and the Russian Federation about how to develop an international Caspian consensus beyond the now moribund 1921 and 1940 Soviet-Iranian treaties. Iran insists that all Caspian nations should receive an equitable 20 percent of the Caspian, while the Russia Federation has consistently maintained that the five Caspian riverine nations – Azerbaijan, Russia, Kazakhstan, Turkmenistan and Iran – should receive their portion based on the length of their coastline. Under the Russian formula, Iran’s sector would consist of 12 percent to 14 percent of the Caspian’s waters and seabed.

The five nations are to discuss resolving Caspian division issues at the upcoming Fourth Caspian Summit to be held in Astrakhan in the fall. Even if no definitive consensus is reached, each of the five nations has cautiously moved into what would be its evident offshore waters – and Azerbaijan and Turkmenistan have discussed bilaterally delineating offshore issues between themselves, lying as they do directly across from one another on the Caspian’s eastern and western shores.

One thing is certain – given European concerns about energy security, finding funding for the Caspian subsea pipeline and TANAP will not be a problem.