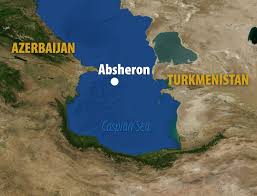 Total SA (FP) said the development of the Absheron field in the Azeri section of the Caspian Sea will be delayed by a year, with production of natural gas expected to start in 2021.

The project will cost $5 billion to $7 billion, Christian Giudicelli, head of Total Azerbaijan, said today in an interview in Baku. The French explorer is the operator of the project with a 40 percent stake.

Total has turned its focus in Azerbaijan to Absheron after announcing last week the sale of its 10 percent stake in the country’s Shah Deniz gas project to Turkey’s state oil company for $1.5 billion. With that deal, Total Chief Executive Officer Christophe de Margerie will have sold $16 billion of assets as part of a plan to hone the company’s portfolio.

“We are working on a development plan for Absheron,” Giudicelli said. The proposal will be put to State Oil Company of Azerbaijan, known as Socar, which has a 40 percent stake. French gas utility GDF Suez SA holds 20 percent.

Separately, Vaqif Aliyev, head of investment at Socar, told reporters today in Baku that both EON SE and Total may sell their stakes in the Trans-Adriatic Pipeline project designed to carry Caspian gas from the Turkish-Greek border to southern Italy.

“I have no information about that, and I can’t comment,” Giudicelli said when asked if Total was pulling out of TAP. He labeled the possibility a “rumor.”

Development in Azerbaijan is part of Total’s effort to get new fields onstream after 2017, the year de Margerie is targeting for output to rise to about 3 million barrels of oil equivalent a day from last year’s 2.3 million barrels.

The chief executive has also embarked on a campaign to cut costs including delaying investment decisions on big projects.

The French oil company announced last week it would cut jobs and delay investment in the Joslyn oil-sands project in Canada because of escalating costs. Prior to that, it had held off from making an investment decision on the Kaombo project off Angola until April to bring the development cost down by a fifth to $16 billion.