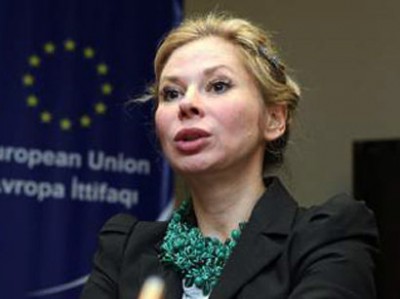 The Southern Gas Corridor remains our top priority with regard to our energy security and EU will keep supporting its realization and its expansion, the head of the EU Delegation to Azerbaijan, ambassador Malena Mard said.

She made the remarks during the opening of the 21st International. Caspian Oil and Gas Exhibition Incorporating Refining and Petrochemicals.

Mard underscored that the Southern Gas Corridor will also entail significant mutual benefit not only in terms of energy security, but also in terms of employment creation and social economic development.

The EU attaches great importance to the bilateral cooperation and the implementation of this project, the head of the EU Delegation said.

The ambassador stressed that since the signature by the Azerbaijani President Aliyev and the president of the European Commission of the joint declaration on the Southern Gas Corridor, significant progress has been achieved in the implementation of this project.

She also emphasized the significance of the final investment decision by Shah Deniz Consortium in December, 2013.

The EU believes that the Southern Gas Corridor should carry at least 10 percent and ideally 20 percent of the European demand.

“Azerbaijan will be substantial contributor to the Southern Gas Corridor. Our energy cooperation relies on a very solid basis. Our common goals in terms of energy security provide a right condition for fruitful cooperation,” the head of the EU Delegation to Azerbaijan, Malena Mard said.