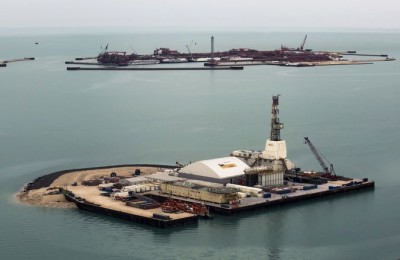 Around the world, the giant oil companies of the United States and Europe are putting the brakes on a decade-long spending spree focused on finding and developing offshore oil fields in ever-tougher environments.

Oil majors like Total and Chevron are now prepared to ditch or delay costly megaprojects, putting off investment decisions or reducing exposures that they deem too risky.

This is a major shift in an industry that has been focused for years on chasing production growth at any cost.

“We’re certainly seeing projects being pushed back,” said Iain Pyle, an analyst with the investment research firm Sanford C. Bernstein & Company, based in London. “I think, rather than it being delays due to problems with the projects or operational issues, it is companies saying they won’t approve a project because it looks too expensive.”

“Production might be lower than what people expected” as a result, he noted. “But the trade-off is capital expenditure control, improved free cash flow — a situation that investors would much rather have.”

Total made the highest investments in its history over the past three years, drilling in areas that were hard and costly to explore. Now, it is at the forefront of a drive by companies including BP and Royal Dutch Shell to contain costs, cut spending and sell assets to shore up their finances.

“We have to curb costs, as we can’t count on oil and gas prices’ continuing to rise,” Total’s chief executive, Christophe de Margerie, told journalists at a recent energy conference. He warned that some projects would be put on the back burner or even abandoned if ways to cut costs could not be found.

Reflecting its new cost-control strategy, Total announced in May that it had sold its minority stake in the Shah Deniz 2 gas project in the Caspian Sea off Azerbaijan, one of the world’s largest and at $45 billion one of the most expensive, just a few weeks after Norway’s Statoil also sold out. In April, Total said it was slashing spending on a deep and complex project off Angola.

Analysts say the oil majors are trying to avoid repeating mistakes caused by an unshakable belief in rising oil and gas prices that led them to take overly risky investment decisions.

A casebook example is Kashagan, a giant Caspian oil and gas field discovered off Kazakhstan in the early 1990s and developed by international oil companies. A highly challenging project, it is years behind schedule, plagued by cost overruns — and now halted by leaks from corroded pipelines.

“I don’t know if Kashagan will be a loss-making operation, but there is a risk,” said Pierre Terzian, head of Petrostrategies, a French consulting and publishing firm.

The investment per barrel in Kashagan was almost five times higher than a typical Iraqi or Saudi field, Mr. Terzian said, and companies have become wary of the danger of finding themselves trapped in excessively high-cost projects if oil and gas prices should fall.

Still, the International Energy Agency, the intergovernmental body in Paris that coordinates national energy security policies, called in a report this month for the oil industry to keep investing in new output, in particular in the Middle East, to avoid a supply shortfall that could spark tighter and more volatile oil markets, with prices on average rising $15 per barrel by 2025.

Analysts at Bernstein say oil prices are likely to remain stable in the near term, but they also point to a long-term uptrend, with prices underpinned by rising costs. They predict that oil prices will rise to an average of $132 per barrel in 2018, from $110 per barrel now.

Service costs have swelled 7 to 8 percent a year since 2011, according to industry experts, while the price of oil has stabilized, squeezing producers’ margins to the thinnest in almost a decade.

Because they are big, complex, often inaccessible and needing highly skilled workers, megaprojects have even higher costs, they say.

Some senior industry executives complain that recent cost inflation has been only partly justified by the technological challenges of producing oil in extreme conditions.

Higher billings by service providers in the past three or four years have been “far in excess of what we would consider normal,” said Arnaud Breuillac, head of production and exploration at Total.

If high costs should force the cancellation or delay of large development projects, “this oil will not be in the market 10 years from now, which will lead to an oil price rise that could be detrimental to the world economy,” he warned.

This argument does not sit well with oil field service companies, which argue that their revenue is not increasing. The real problem lies with poor investment decisions by the oil majors, they say.

“When you look at our industry, I don’t think that it is making a lot more money than it was three, four or five years ago,” said Julian Waldron, chief financial officer at the French oil field service company Technip.

“The era of easy to find, easy to extract, easy to process” oil from accessible shallow-water offshore oil fields is over, Mr. Waldron said. If oil majors want to cut costs, they should develop projects more incrementally, he suggested.

The Kashagan field, where oil companies put in big front-end investments, unsupported by production revenue, was an example of what not to do, he said.

“Kashagan, wasn’t that crazy?” Mr. Waldron asked. “Maybe our customers will find ways of proceeding more quickly to generate revenue from first oil and will therefore invest on an incremental basis over the lifetime of a field.”

The prospect of high prices, underpinned by high-cost fields, may be good news for some — not least OPEC, whose member countries pump around a third of the world’s oil supplies. “OPEC is placing all its hopes” in high cost reserves supporting prices, Mr. Terzian of Petrostrategies said, “because it has run out of ideas on how to do so itself.”