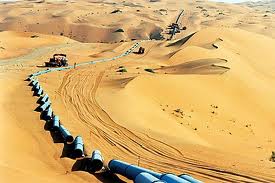 Turkmenistan is sure that the Turkmenistan-Afghanistan-Pakistan-India (TAPI) gas pipeline project could be implemented , said Turkmenistan President Gurbangulu Berdymohammadov while addressing delegates of the International Gas Congress that opened in Avaz yesterday.

“I am sure that concrete approaches will be formulated and constructive proposals concerning the TAPI construction will be forwarded  at the Gas Congress,” reads the address.

Turkmenistan President believes that implementation of this historical project will play a significant role in strengthening of peace and expansion of the economic cooperation in the Asian region.

Earlier the Turkmenistan officials said that TAPI construction will begin in 2015.

The intergovernmental agreement of the countries-participants on beginning of the project implementation signed in 2010 is the basic document for TAPI promotion.

Asian Development Bank (ADB) is the transaction advisor of TAPI and its main goal is to create TAPI Ltd company and find the consortium leader.