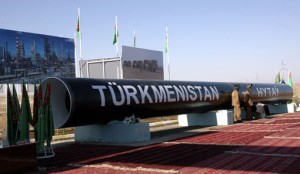 The tank gas preparation plan with the capacity of 9 billion cub.m. a year was launched on the east of Turkmenistan yesterday, which will allow increasing gas export from Turkmenistan to China.

The plant at the cost of $600 million was built by the Chinese National Petroleum Company (CNPC) on the contract area Bagtyarlik. It has become the second one on this territory, the first plant with the capacity of 6.5 billion cub.m. of tank gas was launched in 2009.

Since 2007 the contract area Bagtyyarlik is being developed by CNPC and is the main source of raw materials for the Turkmenistan-China gas pipeline, which was launched in December 2009.

CNPC reported that after launching of the second plant, export of Turkmenistan natural gas to China reached 80 million cub.m. a day (29 billion cub.m. a year).

According to the bilateral agreements, in the coming years Turkmenistan must export 65 billion cub.m. of gas a year to China.

At the plant opening ceremony Turkmenistan President Gurbangulu Berdymohammadov said that about $4 billion has been invested into development of Bagtyyarlik gas production capacities. President has highly evaluated a strategic cooperation with China and added that total volume of Chinese investments into Turkmenistan totaled about $20 billion, reported RIA Novosti.