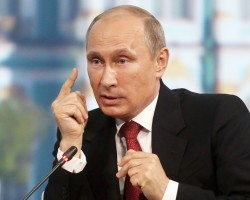 Russian President Vladimir Putin called the talks about the necessity to reduce Europe’s energy dependence on Russia an “absolute nonsense” at the International Economic Forum in Saint Petersburg.

He added that there is no unilateral energy depedence of Europe on Russia. “This is absolute nonsense, because  there is always a mutual dependence and delivery of our energy resources to Europe constantly grows,” he added.

Russian President added that Russia fulfills its contractual obilgations to delivery energy resources and counts on the similar approach of the countries consumers and transit countries.

Putin believes that situation in Ukraine confirms the necessity of direct gas deliveries to Europe bypassing the transit countries. He believes that the European Commission must occupy an active position to creation of direct routes of gas export to Europe.

Putin also said: “We are aware of the partners’ plans to expand the circle of gas suppliers to Europe, but we are not going to dramatize the situation. We have no doubts that the EU knows that deliveries from Russia help to diversify energy balance of the European Union,” he added.

Russian President explained Russia’s entry to the Asian market by a slow growth of energy consumption in Europe and problem with transit.