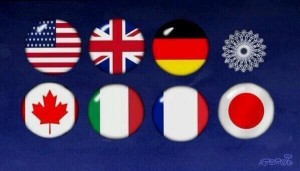 Energy Ministers of Big Seven have agreed the final document of their meeting in Rome, which envisages working out of the strategy of diversification of energy deliveries to Europe.

The statement will be later submitted for approval to the leaders of the group at the summit in Brussels.

“Ministers have fully agreed that energy supply safety must be raised for development and upgrade of the infrastructure networks and that it is important to work out the strategy for diversification of energy deliveries and efficient use of the energy resources,” reads the press statement posted on the web site of the Italian Ministry of Economic Development after discussions of the Ministers on Tuesday.

The international meeting took place in Rome on May 5-6, 2014. Yesterday Italian Premier Mateo Renzi joined the Ministers and added that “the meeting of the group is not aimed at adopting new sanctions against Russia.”

G7 countries have earlier threatened to apply sanctions against some sectors of Russian economy in case of further escalation of situation in Ukraine. Russian Foreign Minister said that it is counter-productive to use the language of sanctions with Russia, as the sanctions reflect “unwillingness to admit the reality and intention to impose imbalanced approaches.”