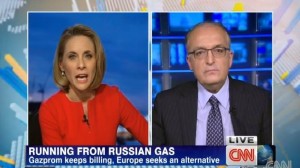 Azerbaijani gas is not considered a big competitor to the Russian gas at the European market, as the volumes of the Azerbaijani gas supply to Europe will not be substantial at the moment.

“We think that our deliveries of additional or alternative gas to Europe will be a step to diversification of the supplies to the European Union and we will fill the gap between the supplies and demand of gas by the year when our gas will be ready to be supplied to Europe,” vice-president of the State Oil Company of Azerbaijan (SOCAR) on marketing and investments Elshad Nasirov said.

Nasirov said he doesn’t believe Azerbaijan has to use companies like SOCAR or the production of gas, as a tool against someone.

“Our goal is to diversify gas supplies to the European Union,” he underscored in an interview to CNN TV channel. “Azerbaijan is interested in becoming a reliable energy partner for Europe.”

“At the same time we are ready to supply gas at the shorter destinations to our neighbors, Georgia, Russia, Turkey,” he noted.

Talking about the price of supplied gas, SOCAR’s vice-president said that they are based on the hub and market prices.

“If deliveries of gas to Europe will be profitable enough we will provide additional volumes of gas to the same countries,” Nasirov stressed.

Gas will be supplied as part of the Southern Gas Corridor – a project that will allow Europe to diversify its hydrocarbon source supply and increase energy security, while Azerbaijan continues to buy a new market in the face of Europe.

The final investment decision was made on the second phase of the Azerbaijani Shah Deniz offshore gas and condensate field’s development on December 17, 2013. Some 10 billion cubic meters of gas from the field will be supplied to the European market.

The contract for development of the Shah Deniz offshore field, which has proven reserves of 1.2 trillion cubic meters of gas, was signed on June 4, 1996.