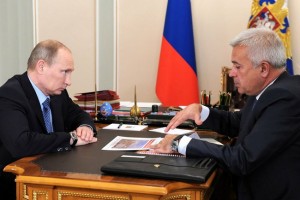 After nearly 30 years, Lukoil CEO Vagit Alekperov has finally caught his Iraqi elephant — the supergiant West Qurna is an oilfield so big the world may never see its like again.

In mid March, Russian oil giant Lukoil celebrated the start up of the West Qurna-2. The Iraqi oilfield, located near the southern city of Basra at the intersection of the Tigris and Euphrates rivers, was quite likely the world’s biggest untapped field, with recoverable oil reserves believed to be in the neighborhood of 20 billion barrels.

The initial production from West Qurna-2 is 120,000 bpd. Within a year Lukoil intends to boost that to 400,000 bpd. And if all goes well in the next few years, says Lukoil Overseas President Andrey Kuzayev, they could increase the output to 1.2 million bpd — a level that West Qurna’s reservoirs could sustain for 20 years or more.

Bringing West Qurna-2 online is a huge deal. For Iraq it represents tens of billions in future revenues. For Lukoil  and CEO Vagit Alekperov it represents the culmination of three decades of effort by Russian geologists and engineers — who discovered the field under the auspices of Saddam Hussein in the 1980s, studied it during U.N. sanctions in the 1990s, lost it in the American invasion, and finally regained control of it in 2007, beating out the likes of BP in an auction for development rights.

And yet the start-up of West Qurna-2 is bittersweet. Lukoil is dedicated to getting the field up to 400,000 bpd so that it can start making back the more than $4 billion it’s invested so far, but Kuzayev tells me (through a translator) that the company’s shareholders “have not yet approved final development” plans to goose it up to 1 million bpd.

Lukoil is also taking it slow on another Iraqi project it has lined up at a field called Nassiriya. The reason is simple: “Shareholders are very conservative towards additional risk in Iraq.”

Iraq appears to be hurtling back into chaos. More than 750 people were killed in the month leading up to elections last week. Violent deaths have rocketed up from a low of about 300 per month in 2011 to upwards of 1,000 a month in the past year. Sectarian civil war seems all but inevitable as rival Sunni and Shiite militias operating in Syria expand their operations across the border into Iraq. According to Reuters, Iraq’s oil minister Hussain al-Shahristani said in January that unrest in western Iraq was directly related to the civil war in Syria.

The oil sector has been hit by the strife. Analysts at Bernstein Research have tallied up 40 attacks on the pipeline running from the giant Kirkuk field into Turkey over the past year. An attack on pipeline near the Iran-Iraq border in February left 19 dead. Last

November Schlumberger temporarily suspended its operations in Iraq after violent protests erupted at BP’s Rumaila field (1.4 million bpd); foreign contractors and local workers had quarreled over the display of Shi’ite flags and banners. Paring its risk, Exxon farmed out a 25% stake in its West Qurna-1 project to PetroChina earlier this year. Sonangol, the Angolan state oil company, announced it was pulling out of two projects there because of security concerns. Violence aside, Paolo Scaroni, CEO of Italian major Eni, declared recently that his company was considering pulling out of Iraq entirely, having waited six months for approval of a key permit. Norway’s Statoil used to be Lukoil’s partner in West Qurna-2, but it gave up its stake in the project back in 2012.

Bombs and riots are bad enough. But even permitting delays (like what Eni was complaining about) can have a tremendous impact on the economics of these giant projects. Oil companies only begin to get their capital investments paid back once the oil starts flowing. Time is money; the longer they have to front those billions in capex, the the lower their rates of return are going to be. Analyst Oswald Clint of Bernstein Research figured in a recent report on the Iraqi oil sector that Lukoil will be hard pressed to make even a 10% annualized return on the capital it has invested so far in West Qurna-2.

Vagit Alekperov was born in Azerbaijan. His father worked in the oilfields. And soon he did too. As Peter Maass wrote in his excellent 2004 profile:

“The facilities were Dickensian. He lived on primitive rigs prone to explosions, fires, storms and other disasters. On one occasion, a blowout on his rig threw him into the storm-tossed Caspian, and he had to swim for his life.”

But Alekperov soon graduated from the rigs to the corridors of power. In the 1980s Alekperov was a deputy Soviet oil minister and Russian geologists had been intently studying West Qurna at the behest of Saddam Hussein. They determined that West Qurna, near the southern city of Basra, likely contained more than 20 billion barrels of recoverable oil — enough to make it the biggest untapped oil field in the world.

In 1991, just weeks before the Soviet Union collapsed, the government created Lukoil, and Alekperov became its head. The name comes from the first letters of the names of the three giant fields assigned to the company: Langepas, Urai and Kogalym. The company was owned by the Russian government, which in 1993 privatized it and handed out vouchers (essentially shares of stock) to employees. Most workers sold theirs immediately, for far less than they were worth. Thus Alekperov acquired 10% of the company (since expanded to about 21%). Forbes calculates his net worth at $12.7 billion.

U.N. sanctions brought against Iraq after Saddam’s invasion of Kuwait prevented West Qurna’s development. In 1997, however, Saddam granted Lukoil the right to develop the field; his cut: 90% of the oil. Lukoil studied the field, and trained Iraqi engineers in Siberia, but didn’t dare violate sanctions and start drilling.

By 2002 Saddam was tired of the delays and annulled the deal. Lukoil held out hope that it would regain West Qurna after the American invasion. Vladimir Putin insisted that President George W. Bush had promised him as much, in exchange for Russia’s support in 2004 for an agreement by Iraq’s creditors to forgive $13 billion in debt. And yet in 2007 Iraqi leaders, with the encouragement of American advisers, officially cancelled Lukoil’s deal and added West Qurna to the oilfield contracts up for auction.

As the biggest undeveloped field in Iraq, West Qurna-2 was seen as a main prize. In vying for the field, companies bid against each other on how low a fee they were willing to accept per barrel recovered. Lukoil beat out BP, Total and Petronas with a bid of just $1.15 per barrel — the lowest margin of any of the major development deals awarded by Baghdad after the war. The average contracted fee is about $2 per barrel. How could Lukoil afford to bid so low? It had already spent 20 years and millions of dollars studying the field and planning its development.

In 2012 Lukoil began work on West Qurna in earnest. It has since drilled 48 development wells and constructed a plant to process as much as 400,000 bbl per day of oil and a 126 MW power plant to burn the field’s associated gas. Initial expansion plans forecasted production of 1.8 million bpd by 2017. That’s unlikely now.

But Lukoil has plenty of other options. With current production of 2.2 million barrels per day (of oil and equivalent natural gas) Lukoil is among the world’s biggest oil companies (Chevron, by comparison is at 2.6 million bpd). Last year the company posted net profit of $7.8 billion. With a market cap of about $45 billion, a dividend yield of 5.5% and carrying just 12% debt to capital, Lukoil would appear to be a bargain for oil investors.

Except, that is, for the complications of being a Russian company in the age of Vladimir Putin. After Putin’s takeover of Crimea, the U.S. has leveled sanctions on a number of Russian oil bosses including Igor Sechin, the CEO of Rosneft, and Gennady Timchenko, the CEO of oil trader Gunvor.

So far Alekperov has escaped calls for sanctions against him, though his allegiance to Putin is without question.

Putin and Alekperov sat down in October for a Q&A session, documented on the Kremlin website. The two talked about Lukoil’s training programs, how it buys most of its material from Russian suppliers, and how Lukoil is even expanding into diamonds, thanks to Putin. “You believed in us when you took the decision to entrust us with building a facility to extract diamonds,” said Alekperov.  “I want to invite you to visit in November, to open the processing plant and to receive the first diamonds that are mined.”

Alekperov is just one of many oil billionaires spawned by the fall of the Soviet Union. Mikhail Fridman, Victor Vekselberg, German Khan and Len Blavatnik last year sold their half of TNK-BP to Kremlin-controlled Rosneft for $28 billion. Then there’s Roman Abramovich who made the bulk of his fortune selling Sibneft to Gazprom in 2005. These tycoons have succeeded in large part because they either became close friends with Putin’s Kremlin (especially Abramovich), or they were careful to heed Putin’s July 2000 admonition that they stay out of politics.

Other oligarchs have not been so lucky. Mikhail Khodorkovsky had his control of Yukos ripped away and spent 10 years in Siberian prison after speaking out against Putin. Boris Beresovsky, meanwhile, spoke publicly of forcing Putin out of office and spent years suing Abramovich, claiming he was bilked out of billions in selling his share of Sibneft too early. Beresovsky was found dead of an apparent suicide in his London home last year.

Alekperov appears to be a survivor. He has shown no interest in politics. A 2004 profile of him describes a spotless desk decorated with a framed picture of Putin. Lukoil is considered in the industry to be Russia’s most transparent oil company, and the one most determined to grow into a true international giant. Although Lukoil’s Kuzayev says that West Qurna is the most exciting project in the portfolio, Lukoil has plenty of opportunity outside of Iraq. It’s working with French major Total to start drilling in Russia’s expansive Bahzenov shale (nine times bigger than North Dakota’s Bakken). It has ventures with Chevron in the Tengiz and Karachaganak fields of Kazakhstan. It’s exploring offshore west Africa as well as in the Black Sea and Barents Sea. It recently opened an office in Mexico. And it’s working on a $5 billion greenfield project in the desert of Uzbekistan. To top it off, Lukoil operates hundreds of gas stations in the U.S., mostly in the Northeast.

For Alekperov, West Qurna respresents this ambition, and proves that Lukoil is up to the challenge. In a press release, he said:

“The start of production at West Qurna-2 is strategically important for LUKOIL. Starting up the field on a tight schedule and reaching the target production level underscores LUKOIL’s ability to independently and efficiently manage the implementation of complex large-scale projects and reinforces our position as a global energy company.”

Let’s just hope Putin’s ambitions don’t get in the way of Alekperov’s.