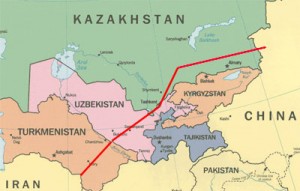 A gas purification facility will be commissioned in Turkmenistan’s Lebap province in early May that will allow transportation of the planned volume of fuel to China, Turkmen President Gurbanguly Berdimuhamedov said at the Cabinet of Minister’s meeting, a message from the Turkmen government said on April 18.

“The head of state said a gas purification facility will be commissioned in Lebap province in early May under the National Socio-Economic Development Program for 2011-2030. This will allow natural gas to be transited to China in the volume envisaged by the program,” the government message said.

Previously, the Turkmen president issued a number of instructions to carry out accelerated work on a stepwise increase of gas export via Turkmenistan-China gas pipeline. There was a report made on construction of the second gas processing plant in the Bagtyyarlyk contract territory, which serves as a resource base for this interstate gas pipeline.

China National Petroleum Corporation (CNPC) carries out the development of Bagtyyarlyk in accordance with the Production Sharing Agreement signed with the State Agency for Management and Use of Hydrocarbon Resources under the President of Turkmenistan.