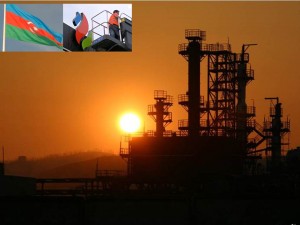 Azerbaijan annually supplies from 500,000 to one million tonnes of oil to a refinery in Kralupy (the Czech Republic), SOCAR vice-president Elshad Nasirov said at the second meeting of the Azerbaijani-Czech intergovernmental commission on economic, scientific-technical and cultural cooperation in Baku on April 25.

“Azerbaijan ensures about 26 percent of the Czech Republic’s oil imports,” he said.
SOCAR vice president regretted that the work on developing the Odessa-Brody-Plock-Gdansk pipeline construction project is likely to be suspended in these circumstances.

“At the same time, this does not negate other prospects of cooperation with the Czech companies,” he said. “SOCAR cooperates with the Czech Republic in the equipment supply. The Czech companies can supply the appropriate units for the refineries being built in Turkey, two fertilizer plants in Georgia and Azerbaijan and a large refinery complex in Azerbaijan from 2017 -2018.”

Sarmatia IPC was created by Ukrtransnafta and the Polish PERN Przyjazn company on July 12, 2004 to attract investments to design and complete the Odessa-Brody oil pipeline to Plock.

At the moment Sarmatia’s participants include the State Oil Company of Azerbaijan (SOCAR), the Georgian Oil and Gas Corporation Ltd. (GOGC), Ukrainian Ukrtransnafta, Polish Przedsiebiorstwo Eksploatacji Rurociagow Naftowych Przyjazn S.A. and Lithuanian AB Klaipedos Nafta. Each of the main participants has 24.75 percent of equity participation and the Lithuanian company has 1 percent.

The Brody- Plock oil pipeline (Adam’s gate) is the only missing part of the Euro-Asian Oil Transportation Corridor (EAOTC).