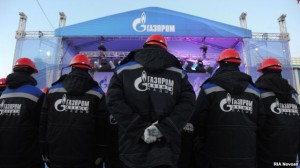 Amid events in Ukraine, the European Union is pondering how to decrease its dependence on Russian energy supplies. Already there is talk in Europe, and further away, that as the door to Russian resources closes a bit, the Southern Corridor should finally be opened and realize its potential.

The major hold-up for the Southern Corridor has been the reluctance of Caspian Basin countries, particularly the Central Asian countries, to sign on to any deals until they could see work starting on pipelines. The European side has been waiting for the supplier countries to commit contractually to energy projects before starting construction of pipelines.

But both sides were able to delay making big decisions because of Russia, which supplied Europe with gas and oil and which provided Caspian Basin countries with existing energy-export routes.

Now, not only is the EU more determined to reduce its dependence on Russian energy supplies, but there is also the real possibility that sanctions or an outright suspension of Russian gas through Ukrainian pipelines could leave EU countries with insufficient energy supplies and Caspian Basin countries with a glut of oil and gas.

Kazakhstan’s oil and gas minister, Uzaqbai Qarabalin, told parliament on April 7 the country is looking for additional export routes and named the reason why the issue is important now: fear that sanctions on Russia might leave Kazakhstan without its primary export route.

While Qarabalin did not specifically mention the Southern Corridor, he did speak about using Kazakhstan’s Caspian Sea port at Aktau, which is one of the links the EU incorporates into its plans for the corridor.

The project has made slow progress since the plan was unveiled in Prague in May 2009, just months after a dispute between Kyiv and Moscow left large areas of eastern and central Europe with greatly reduced supplies of gas.

But there has been some progress in the Southern Corridor scheme in the last five years, and Aktau is one example.

Aktau is undergoing massive expansion and renovation and could, according to Qarabalin, ship up to 20 million tons of oil annually within a couple of years.

Kazakhstan is building up its tanker fleet, as is Turkmenistan, to ship oil and other petroleum products from the eastern Caspian to the Caucasus in the western Caspian.

Late last year, Kazakhstan and Azerbaijan renewed an agreement — suspended over a pricing dispute in 2010 — for shipping Kazakh oil through the Baku-Tbilisi-Ceyhan pipeline. This year, Kazakhstan is due to export 4 million tons of oil through the BTC pipeline. Turkmenistan is also regularly sending tankers to Baku with oil to be pumped into the BTC.

Qarabalin also mentioned Georgia’s Black Sea port at Batumi, where Kazakhstan owns the marine terminal. This route involves transportation from Baku by rail; and in order to better service shipments between the Caspian and Black seas, Azerbaijan has in the last few years purchased hundreds of special railway wagons to carry oil and LNG and upgraded the railway lines.

Azerbaijan is the critical link for the Southern Corridor. U.S. Secretary of State John Kerry specifically mentioned Azerbaijan as part of Europe’s energy future during a U.S.-EU Energy Council meeting in Brussels on April 2. Kerry said part of the priority for European energy security “is going to be to look at how do we get more natural gas through…the Southern Corridor, from Azerbaijan to Turkey and on to Europe.”

Azerbaijan and Turkey have already started a new gas route in the Southern Corridor with the Trans-Anatolian Pipeline (TANAP), which in Europe will become the Trans-Adriatic Pipeline (TAP) and bring up to 20 billion cubic meters (bcm) of Azerbaijani gas through Greece and Albania, across the Adriatic Sea to Italy.

There are also several projects that could significantly boost the amount of gas Caspian Basin countries could send to Europe via the Southern Corridor. Among them are the Trans-Caspian Gas Pipeline from Turkmenistan to Azerbaijan, the White Stream pipeline to carry Caspian gas to Romania and Ukraine, and even an evolved version of the Nabucco pipeline project, once the EU’s choice for a gas pipeline between the Caspian and Europe.

More routes would be needed as Russia currently supplies Europe with some 280 bcm of gas and between 70 percent and 80 percent of Russia’s 230 million tons of oil exports goes to Europe.

But the economic need for the Southern Corridor to open wide has never been greater, and both Europe and the countries of the Caspian Basin have new impetus to see the plan realized.